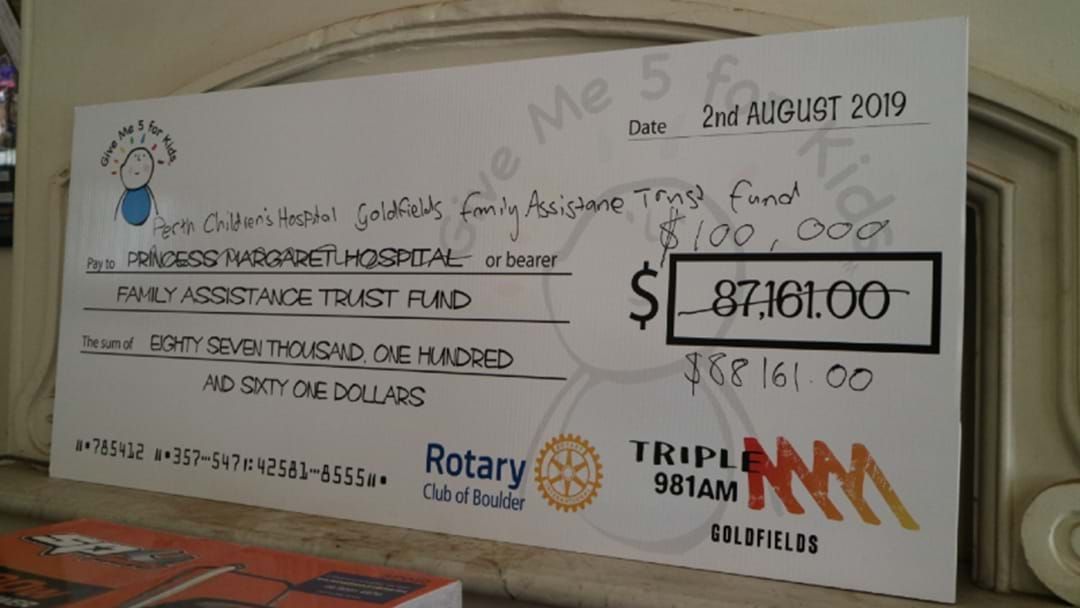 A new record has been set for the Triple M Goldfields annual fundraiser - Give Me 5 For Kids.

In what was a massive amount, originally $87,161 was our total, this was then boosted by a $1,000 donation from Northern Star Resources. This then had $9,000 added after a surfboard was auctioned at the Rotary Club of Boulder Launch Party for their online auction. Then.... a donation from the floor made it $100,000!!

Long story short, a local family had their world turned upside down with their 3 year old  boy being diagnosed with a Wilms tumour on his kidney.  The trips between Kal and Perth were numerous in the early stages of treatment and the GM5 fund was used to assist with travel and accom expenses. Jayden is now in remission and the family have relocated back to Kalgoorlie.  Due to the assistance they received, the parents decided they would like to give something back to the Goldfields.  Jayden’s Dad and a mate handcrafted a Bohdi Tree surfboard and donated it to the Radio Auction.  The Rotary Club of Boulder decided whatever funds were raised from the surfboard would go towards the GM5FK’s tally.  The surfboard went for $9000 dollars which was amazing in itself, then one of our Ambassadors donated $2500 to get us to the $100,000

This is by far the most Give Me 5 For Kids has raised for the Perth Children`s Hospital Goldfields Family Assistance Trust Fund in the 12+ years of the agreement.

Events that have helped contribute to the huge tally include

General Manager Southern Cross Austereo Rae Hutchinson said "The Goldfields community continues to amaze me with their generosity.  The support from our Ambassadors, Partners, local businesses and the general public has been outstanding. Community supporting community at its best and the envy of other regional areas"