We still get chills. 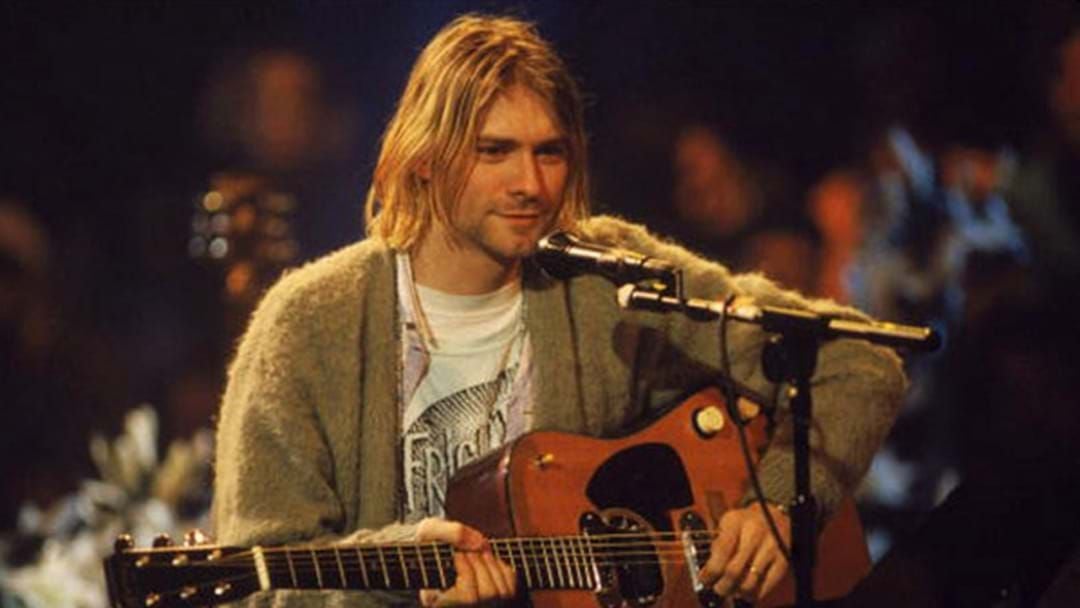 Triple M is paying tribute to Kurt Cobain with a massive special on Generation 90s. Listen from 12pm, today.

One of the great enigma's of rock, the Nirvana frontman is one of the most iconic and influential musicians of our time... and we still get chills every time we hear "Smells Like Teen Spirit".

Triple M Head of Rock, Jacqui Kassulke has scoured the archives to reveal the man behind the myth.

1. When Nirvana was on the rise they got a fax from Metallica that read: “We really dig Nirvana. Nevermind is the best album of the year. Let’s get together soon, Metallica. PS, Lars hates the band.”
2. Kurt would more often than not throw up before shows due to stage fright
3. Adelaide’s Thebarton Theatre has a scribble on the wall in the Green Room that Kurt and Dave Grohl drew before their show in 1992 (I’ve seen it!)
4. Kurt almost joined the Navy at one point, even meeting with a recruiter
5. Cobain started using Heroin to alleviate chronic stomach pain
6. It’s claimed he’d spend $100 a day on his habit
7. Kurt & Courtney Love married in Waikiki, in their pyjamas
8. In his suicide note, Kurt references Neil Young’s “Hey Hey, My My” lyrics ‘it’s better to burn out than to fade away’.
9. When asked what it was like to be number one, Kurt responded “it’s like being number 16 except more people kick your ass”
10. In 1992, Cobain claimed that he and Courtney Love spent a million dollars: $80,000 on personal expenses, $380,000 on taxes, $300,000 on a house in Carnation, Washington, and the rest on doctors and lawyers. “That’s not very much,” said Cobain. “That’s definitely not what Axl [Rose] spends a year.”
11. Before he was famous, Kurt used to teach kids how to swim at the YMCA in Aberdeen
12. As a child, Kurt had a Mickey Mouse drum kit
13. Kurt’s favourite band was the Pixies
14. He insisted Nirvana rehearse 5 times a week when they first started out
15. Kurt was an animal lover and considered buying a Zoo
16. Kurt was terrified of playing acoustically ahead of MTV Unplugged, insisting that some of the guitars were actually plugged in
17. Foo Fighters “My Hero” is about Kurt
18. One of Kurt’s early bands was called Fecal Matter
19. Kurt had written an entire solo record before he died
20. In 1993 Kurt OD’d on heroin yet still performed that night like nothing had happened
21. As you drive into his home town Aberdeen, you’re greeted with this sign – welcome to Aberdeen come as you are
22. Cameron Crowe’s film about the grunge scene “Singles” was originally titled “Come As You Are”
23. Kurt always spelt NIRVANA all in caps
24. Nevermind was recorded in the same studio as Fleetwood Mac’s Rumours
25. There’s a rubber duck sound effect in the song ‘Drain you’
26. The video for “Sliver” was filmed in Kurt’s garage
27. Kurt never paid the $500 he promised the studio manager to record Bleach
28. AC/DC’s “Back In Black” was the first song Kurt learned to play on guitar
29. Kurt wanted to name Frances Bean ‘Eugene’ if she’s been a boy
30. Kurt’s phone number at the time of his death 352 0992
31. During the recording of MTV Unplugged – Kurt, Nirvana and Meat Puppets did a version of “Sweet Home Alabama” that never made it to air because they couldn’t get it quite right
32. Kurt voted for Bill Clinton in the 1992 US Election
33. Kurt & Courtney used to check into hotels as “Mr & Mrs Simon Ritchie” which was Sid Vicious’ real name
34. Kurt used to string his guitars with piano strings
35. Kurt had a homemade ‘K’ tattoo
36. After dropping out of High School, Kurt took a part time job there as a janitor
37. Teen Spirit was inspired by Kurt’s girlfriend at the time’s deodorant
38. Kurt and the rest of the band were thrown out of their own record release party for starting a food fight
39. Kurt was homeless & sleeping in his car whilst recording Nevermind
40. Kurt hated “Smells Like Teen Spirit” so much he’d intentionally butcher it when playing it live
41. He was once in a Creedence Clearwater Revival cover band
42. Axl Rose & Kurt had an altercation at the 1992 MTV Awards and a feud was born
43. His favourite album of all time was The Stooges Raw Power
44. Sometimes he spelt his own name Kurdt Kobain
45. Whilst his was friends with Eddie Vedder, Kurt hated Pearl Jam’s music
46. He wanted to name Nirvana’s 4th album “I Hate Myself And I Want To Die
47. According to his parents, Kurt’s first concert was Sammy Hagar & Quarterflash
48. Kurt’s ex-girlfriend was frustrated at having to support him finically during the early days. It was only after his death that she learnt she was the inspiration for “About A Girl”
49. Kurt had a number of pets including a rat called Kitty
50. Nirvana was chosen by Kurt Because he wanted a name that sounded “beautiful, nice and pretty as opposed to raucous” for the band