Esperance NewsAccording to Rumour! Coming to the Bijou Theatre

According to Rumour! Coming to the Bijou Theatre 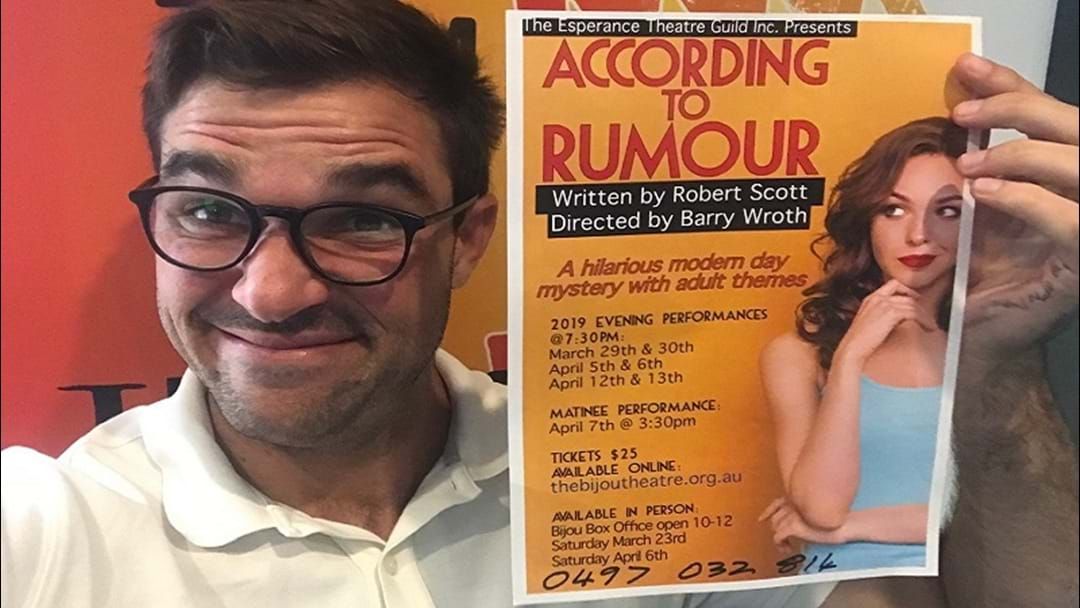 Another production will descend upon Esperance’s little gem on Dempster Street with According to Rumour coming to the Bijou Theatre for three weekends!

The story, which was written from the hand of Robert Scott in Britain, has been Australlian-ised for a local audience, with words such as ‘blimey’ being substituted for well-known colloquialisms like ‘crikey’.

Barry Wroth is the director of the play and is delighted with the progress made by his relatively young cast. He is “very excited” for opening night saying the show will be “absolutely hilarious and the cast that I’ve got have done an amazing job!”

Barry explained the plot on the Sean for Breakfast show.

“It starts with this young fella Carter who wakes up in the morning with a huge hangover after his divorce party and there’s a scantily clad young lady running around the place, combined with a fridge full of about $50,000…to add to his panic at this situation, his mother decides to come and visit him with her helpers, who are twins, and her daughter, and her daughter just so happens to have a detective as her husband.”

Surprisingly for the director after purchasing the rights for the play, the writer Robert Scott contacted him to wish him the best and offer him any help producing the play. The British playwright has since promoted the event on his social media pages and website, although his general audience is in Britain…

The show has Friday and Saturday night starting this weekend, 29 March, for three weekends, with a Sunday matinee on the middle weekend.

This play is sure to be a bundle of laughs! Make sure you don’t miss out!