A month ahead of schedule 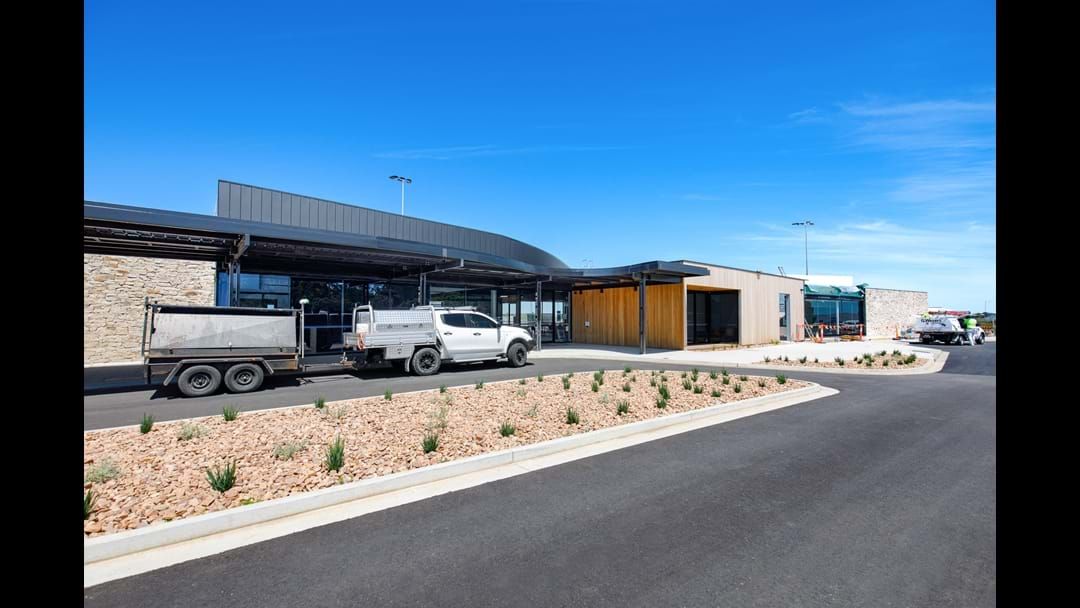 After two years of construction and ten years in planning the $9.2M Mount Gambier Regional Airport Upgrade is now complete, on time and on budget.

A month ahead of schedule Stage 2 of the $6.2M terminal will be open to the public from Monday 9 November and passengers will be able to enjoy the new layout and design which has improved passenger flow and more usable public spaces.

Stage 2 includes the two main departure lounges, departure ramps and access airside, amenities, carpet and painting as well as the outside works such as landscaping and signage.

The overall $9.2M project had four main components to the upgrade and the Airside works accounted for a third ($3M) of the project with the three main deliverables being; an extension of 120 meters to the main runway to service larger aircraft, a brand new heavy aircraft apron to house a larger contingent of fire bombers and other heavy aircraft and the entire airport precinct has had a full electrical upgrade from the previous 1950’s system. Lead contractor’s Paul Heenan Earthworks, Airport Electrical and Stuckey Electrical worked with Council to deliver the airside outputs as the first phase of the overall development.

Landside, the most visible part of the airport upgrade has been the $6.2M terminal which commenced in October 2019. The team at Ashley Halliday Architects prepared a bespoke and environmentally considered design that would fit in with the region, age gracefully and stand the test of time. Kennett Builders were awarded the construction contract in late 2019 and by engaging a local team of experienced subcontractors they have delivered a beautiful building as a result.

Architect, Mr Ashley Halliday, said the purpose of the building is to connect travellers with the region.

“The Mount Gambier Regional Airport is not only a state of the air transport terminal, it acts as an ambassador for the whole region offering visitors both their first and last impressions. It was important to create a charismatic gateway that captured the unique essence of the Limestone

Coast Region. The epic round skylight clad in charred timber and the forest of pine logs are something different, making people aware that they’ve arrived somewhere special”.

Member for Barker, Mr Tony Pasin, said the upgrade was a big win for the region.

“The Morrison Government invested $3.5 million into this project via the Building Better Regions Fund to ensure this long awaited and important infrastructure project could take shape. This project has not only created important jobs in the midst of an economic crisis, but the redeveloped facilities make for a more positive visitor experience for those visiting our region,” he said.

“I congratulate the District Council of Grant on successfully undertaking this important infrastructure project which will serve the needs of our community long into the future.”

Council Chief Executive Officer, Mr Darryl Whicker, acknowledged that “2020 has not been an easy year for anyone and throughout this project we have had to navigate the difficulties and complexities of the COVID-19 pandemic. Council and Kennett’s were able to bring forward the construction schedule, keep local contractor’s employed onsite and the project has therefore continued to move forward over the winter months”

Mr Whicker went on to say he believes the success of this project has been a full team effort from everyone involved.
“From the beginnings of securing the funding right through to this final stage, the project has been collaborative and well executed by all lead contractors and sub-contractors and in particular the staff team behind the scenes.”

“Council can now exclusively reveal that as a result of outstanding project management on the airside works there was a $640,000 saving which was reallocated to extend the footprint of the terminal providing more floor space and the ability to install access and inclusion friendly amenities for people with a lived experience of disability. The $6.2M terminal has been built with a small team of talented Council staff who have formed and maintained an excellent working relationship with Kennett’s and Ashley Halliday Architects so again I reinforce it has been a team effort to produce such a successful outcome.”
Project Manager, Mr Carlin McNeil, has been onsite for the terminal build, overseen the construction schedule and is pleased with the result and the role Kennett’s have had to play.

“This Terminal is a key piece of infrastructure for our community and despite the challenges of 2020, it’s great to reflect on what we’ve achieved as a building company in partnership with the District Council of Grant and Ashley Halliday.”

“On behalf of Kennett Builders I would like to extend a personal thank you to all the local contractors and other businesses who have remained patient and supportive throughout the build, especially during the difficult winter months. We hope the community is pleased with the result.”

Starting in October 2018 the Mount Gambier Regional Airport Upgrade is co-funded across three tiers of Government. It is funded by the Australian Government through the Building Better Regions Fund and the State Government of South Australia as well as through a $500,000 funding agreement between the District Council of Grant and the City of Mount Gambier.

This project is an excellent example of a collaborative regional approach to deliver essential infrastructure for the Limestone Coast community.