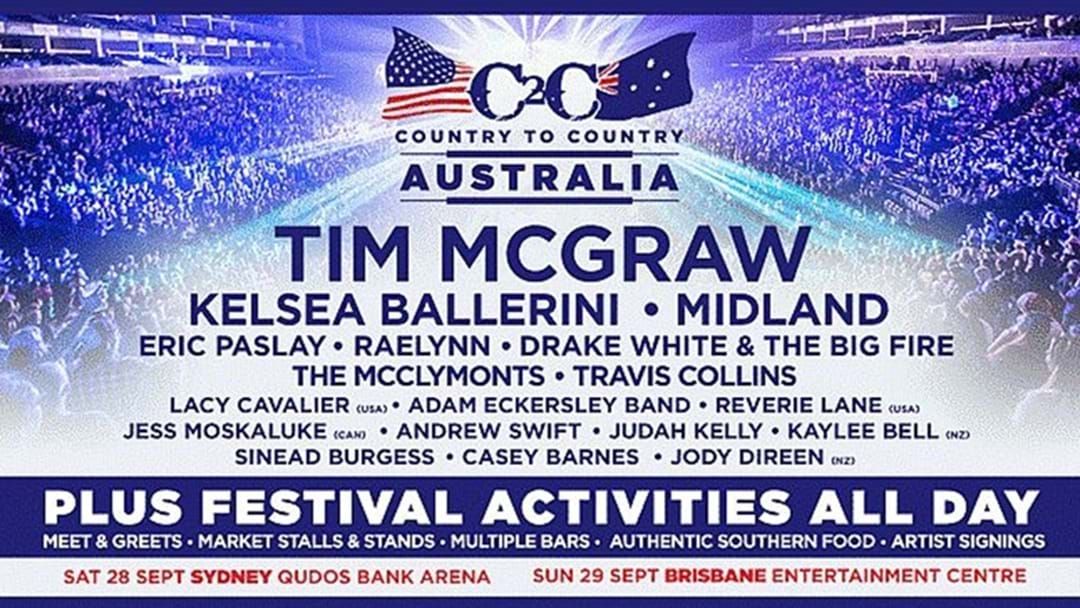 Australian Country Music fans have less than 100 days to go before Country to Country (C2C) Australia lands in Sydney and Brisbane!  With the countdown clock ticking, TEG Live and AEG Presents are proud to announce the final list of artists that will be appearing at C2C Australia in September 2019.

Joining superstar headliner Tim McGraw, chart-topping singer-songwriter Kelsea Ballerini and Midland are some of the most exciting names in country coming out of the US and Canada, plus a couple of much-loved Australian country artists.

Texas born Eric Paslay is a platinum-selling, hit songwriter and dynamic performer. Paslay has co-written five No. 1 hits including “Even If It Breaks Your Heart” (Eli Young Band), “Barefoot Blue Jean Night” (Jake Owen), “Angel Eyes” (Love & Theft), “Rewind” (Rascal Flatts) and his own smash hit single, “Friday Night,” from his critically acclaimed self-titled debut album. Pasley has earned nominations for Best Country Song at the GRAMMY Awards, ACM Song of the Year and CMA Song of The Year for “Even If It Breaks Your Heart” in 2013 and earned his first GRAMMY nomination as an artist in 2016 for Best Country Duo/Group Performance for “The Driver”. Eric Paslay is one of the most exciting, dynamic artists in country music and Australian fans will get to experience it live when he hits the C2C stage in September!

Also from Texas, Raelynn is a two-time ACM New Female vocalist nominee. She penned her single “Tailgate” alongside Canaan Smith, Corey Crowder and Florida Georgia Line’s Tyler Hubbard, and recently dropped her upbeat country rocker “Rowdy”. Raelynn’s empowering anthem “Queens Don’t” showed off another side of the rising star and has earned upwards of 20 million on-demand streams without radio airplay, adding to her cumulative career streaming total of more than 300 million to date. Raelynn’s debut album “WildHorse” was a No. 1 on Billboard’s Country Albums Chart and Top 10 on Billboard’s All-Genre Albums Sales Chart upon release and recognized among the best country albums of 2017 by Rolling Stone, UPROXX and Stereogum. Raelynn’s tour credits include runs with Garth Brooks, Keith Urban, FGL, Miranda Lambert and Blake Shelton.

Up and comer Lacy Cavalier came to prominence on television before she switched her allegiance to her first love – music. The Louisiana native caught the attention of Chase Rice who took her on tour as his opening act on his 2016 US tour. 2019 has seen Cavalier release three singles, “Andre”, “Blue Suede Couch” and her most recent single “Tea”.

Canadian Jess Moskaluke is the first Canadian female country artist to have a song in the Top 5 Canadian country music singles chart since 2008, when her single “Drive Me Away” peaked at No. 3. She is also the first female Canadian country artist since Shania Twain to achieve Platinum single status, with “Cheap Wine and Cigarettes”. Moskaluke received six Canadian Country Music Awards in 2018 (including Album of the Year and Single of the Year) and won the 2017 JUNO Award winner for Country Album of the Year. With a growing fan base, Moskaluke now has over 23 million views on YouTube to date and her current single is “Save Some Of That Whiskey”.

Joining the North American artists is Australia’s Adam Eckersley Band and Casey Barnes.  Adam Eckersley Band has won fans and accolades for their southern-rock “Americana” inspired music. The NSW Central Coast based band have released two studios album (titled “The First Album” and ‘The Second Album’), won the 2015 APRA Country Work of The Year for “Give Her The World” and the 2015 CMAA New Talent Of The Year Award. Golden Guitar Finalist and Tasmanian Casey Barnes will return to Australia for C2C, following key tour dates in the US during the first half of 2019 and the release of his new single “Better Days” taken from his chart-topping album “The Good Life”.

In addition to the final artist announcement, TEG Live and AEG Presents are excited to share the stage roster for each of the four stages at C2C Australia. Arena Stage, Spotlight Stage, The Town Square and The Big Entrance Stage will make up the four stages in both Sydney & Brisbane.

There will also be multiple bars, authentic American style food, market stands and stalls, artist signings, meet & greets plus C2C Australia and artists merchandise. C2C is a full-day arena festival experience, the first of its kind in Australia, and is sure to become a must-see event every year.

This is going to be one helluva festival!  Tickets on sale now via Ticketek.

Tim McGraw will also perform at the 21st annual Deni Ute Muster on Saturday 5 October 2019, with full details at www.deniutemuster.com.au