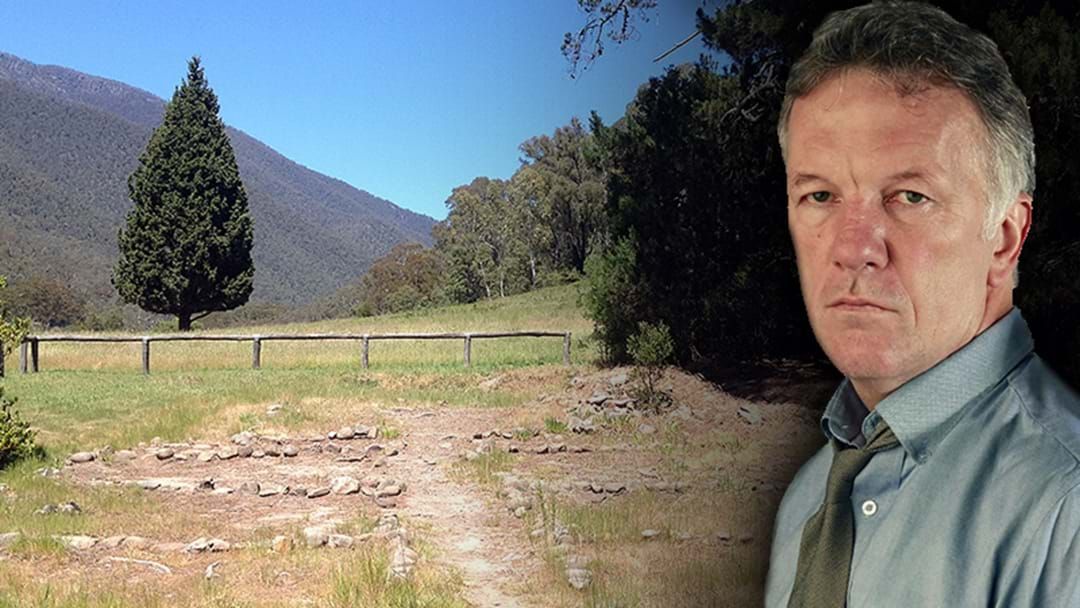 Herald Sun crime writer Andrew Rule gave some details on the mysterious Button Man in the Victorian High Country on the Hot Breakfast this morning.

“Of course, we won’t be pointing fingers at anybody because of course some people get tied up in these things accidentally,” Rule qualified off the top.

“But up in the mountains behind Mount Silk there is a man — an older man, in his early 70s — and he’s a very fit, tough bloke, and he camps out in the bush for weeks at a time.

“He’s regarded by locals as a little bit different, a little bit eccentric. Some deer hunters call him ‘The Button Man’, because he puts little bone buttons in his ears and all that sort of stuff, and he collects deer antlers and he carves them into interesting shapes.

“When deer hunters go up into the mountains, sometimes this man approaches their campfires silently, and he turns up and he sits down uninvited and he makes awkward conversation, and the deer hunters find this, um, a bit strange and off-putting.”

Rule said that the Button-Man’s conversation “spooked” some of the deer hunters, and that both he and John Silvester had written stories about it.

“It [Rule’s Herald Sun column] says that this man camps in the area, roughly the area, where all people have vanished since last July,” he said.

“So when you add it up, so one person goes missing, you go well they got lost, they perished, and the dogs eat them.

“Two people go missing, you go, well, that could have happened again.

“Four’s starting to get a bit interesting.”

Rule said four people have gone missing in the high country in the last 10 months.

“What we’ve got is a man who vanished on the way to Mount Buller last July, a chap who parked his car by the side of the road, never seen again,” Rule said.

“Last September a very fit bushwalker, a guy in his 30s called Niels Becker, set off on a bushwalk.

“Knows what he’s doing, strong, clued up, knows the maps, knows everything, he vanishes in the bush.

“And of course, most recently, as we all know, the new Wonnangatta mystery, Russell Hill and Carol Clay, the couple who’d gone camping up there in March and had never been seen again.”

Rule stressed that the police haven’t charged the Button Man with anything.

“I can say that police have been up to have a long chat to this fellow… it was a very intriguing chat,” he said.