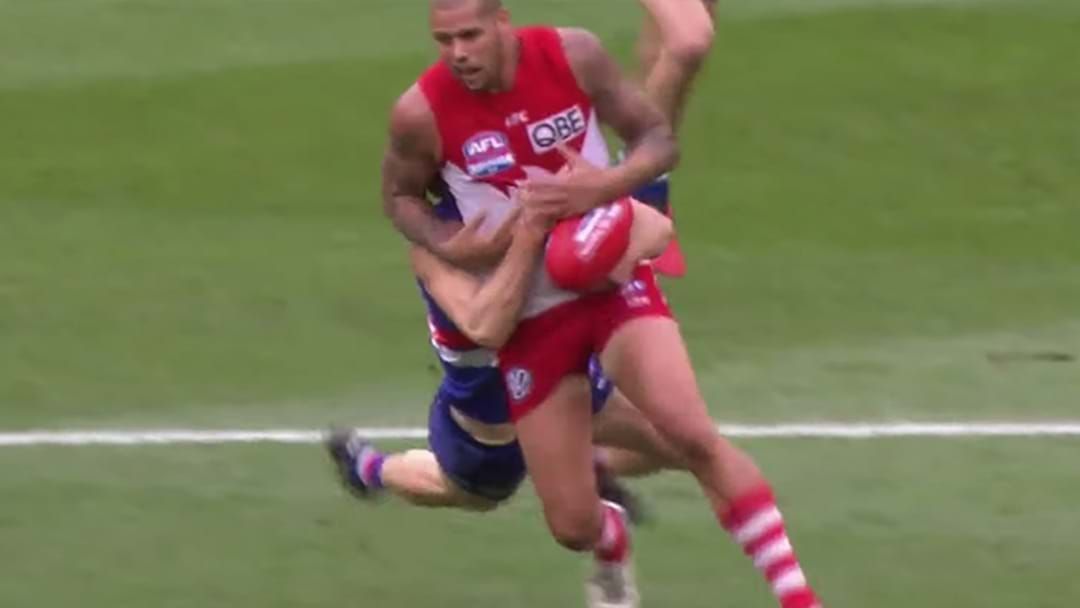 Bulldogs premiership hero Dale Morris joined Dead Set Legends with Joey, Jay and Emma this morning and told us about how his famous tackle on Buddy Franklin late in the 2016 grand final came from the in-depth research he did.

"I actually thought I’d cost us the game before that," Morris said.

"As the ball was exiting our forward 50, I was in a really good position on Buddy, but the Sydney Swans player further up the field was able to sidestep our guy, and I’ve gone from a great position to the worst position.

"Buddy had a run at the footy, and they kicked it to him.

"I knew, I’d done my research on Buddy, and I did notice that when he went for overhead marks he tended to double grab at times.

"He’d tap the ball down and take a chest mark, cause I don’t know, he wasn’t great at the overhead marks."

It was that knowledge MOrris was able to use to his advantage.

"I was out of position so I knew that if he did take a double grab I had to be there to swat the ball away, and lo and behold he did, and I was able to get the ball away and a contest ensued and Buddy ran out to the middle ground, and I stayed at the back of the contest [because] I didn’t want anyone coming through.

"But they handballed the ball to Buddy and I thought 'I’ve stuffed up here'. Buddy’s in the middle of the ground by himself, he’s gonna reel around on his left and he’s gonna kick that ball inside 50 and they’re gonna get a goal.

"So I just put my head down and just chased him as fast as I could because I didn’t want to cost us the grand final, and yeah it all worked out pretty well, got the tackle and thank goodness Boydy (Tom Boyd) kicked it up because I was knackered and I can’t kick over a jam tin!

"Boydy launched it from inside the square and I had the best seats in the house."

We’ll take any chance to relive that moment — with our commentary of course, so be warned that there’s a little bit of naughty language in this video:

Morris said it was one of many moments that won the Dogs the flag that year.

"You talk about moments in finals, especially grand finals, and that’s what the game’s made up of," Morris said.

"If you can win your share or the majority of those moments, those key moments in that game, then it goes a long long way for you winning.

"I had my moment, and took my moment."

Morris also spoke about the Dogs chances of winning this year’s flag and and how great a coach Luke Beveridge is.