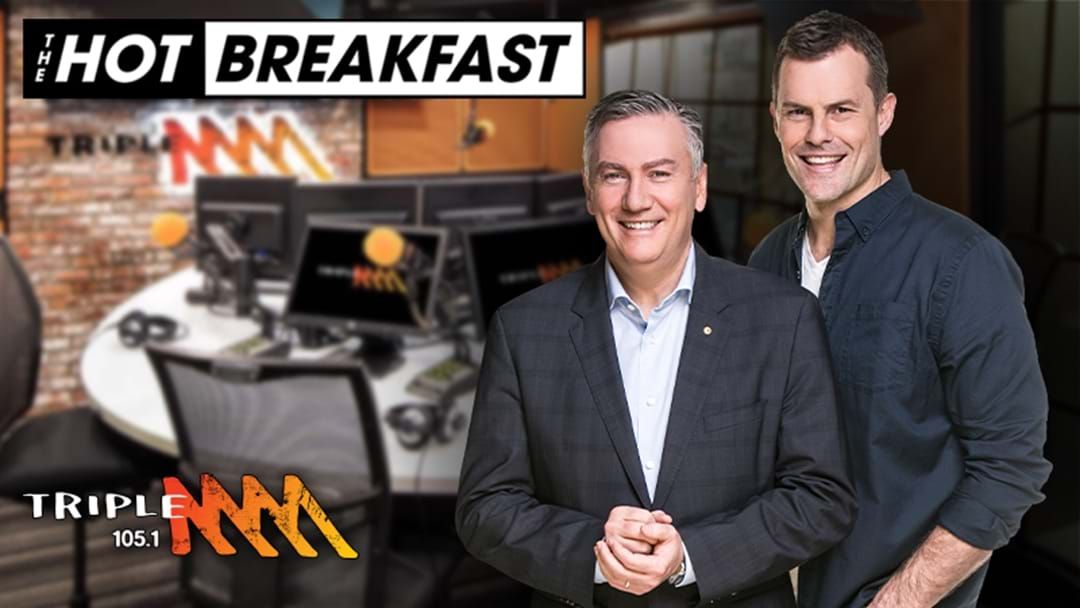 Triple M Melbourne’s The Hot Breakfast, hosted by Eddie McGuire and Luke Darcy, will finish up on Friday 27 November after 11 extraordinary years on air.

Eddie McGuire made the announcement on air this morning, saying "We've decided, that's it."

Listen to Eddie's announcement with Luke and Rosie here:

Launched in 2009, the breakfast show shaped a new era in FM breakfast radio with a clever, almost talkback approach alongside Triple M’s unmistakable sound of sport, rock music and comedy. The Hot Breakfast soon firmed up its position as a Melbourne institution and the go-to FM radio show for Melburnians who wanted to know what was happening in their city alongside a laugh in the morning.  The Worldwide Radio Summit also recognised the show’s trailblazing originality with an award for the Most Innovative Radio Format.

Eddie McGuire is one of Melbourne’s most passionate contributors to the DNA of the city he proudly calls home. Luke Darcy started broadcasting 11 years ago fresh from an AFL career and over the years has cemented his spot as a compelling and whip-smart media player.  Together, Eddie and Luke have delivered a breakfast show that led the news agendas of the day, breaking thousands of news and sport stories and had access to an unrivalled roll call of the biggest names in Australian politics, sport and entertainment. They also had a hell of a lot of fun along the way!

The Hot Breakfast knew how to show their listeners a great time and have hosted annual AFL Grand Final eve soirées,  trips to the US Superbowl, the London and Rio Olympic games, Hawaii and had the honour of being invited by the Australian Government to be the commercial broadcast partner of the Centenary of the landing of the ANZACs at Gallipoli. And when the news mattered The Hot Breakfast stepped up and asked the questions no one else was. Luke Darcy’s interview with Premier Daniel Andrews back in September is the most downloaded piece of audio in Triple M’s history.

Eddie McGuire said: “I joined Triple M 32 years ago as a young journo and this year has been a year like no other for all of us. We found ourselves able to broadcast six hours a day and on weekends when COVID-19 hit. Whilst gruelling, it has also been a true honor and pleasure for us to be with Melbourne every step of the way and the most important year in our show’s history. Without listeners radio is nothing and we have enjoyed the immediate connection with them day in day out and dominated our key target demos.

It has also been a true honor and pleasure for us to be with Melbourne every step of the way and the most important year in our show’s history. Without listeners radio is nothing

“Those closest to me have always known that I continued with breakfast radio while my boys were at school and now my youngest has finished it’s time too for me to finish up a wonderful 11 year run with a 4.00am alarm. I plan to take some time to reflect and recharge with my family and after a good, long break have a look at what the next project for Triple M looks like in 2021, building on new ground we forged back in 2009.”

Luke Darcy said: “The last 11 years has been the most enjoyable experience you could imagine. Sitting next to the man in the suit, Triple M royalty Rosie Walton and comedy giants Mick Molloy and Wil Anderson every morning has been the greatest gift. No media connects as intimately and as immediately to the public as live radio does and it has been a joy to speak to the people of Melbourne every day and be part of their lives. The Hot Breakfast has taken us to two Olympic games, four Superbowls, The World Cup Soccer in Brazil and a life changing dawn service at ANZAC Cove in Gallipoli. It has been epic.”

SCA Chief Content Officer, Dave Cameron, said: “I’d like to sincerely thank Eddie and Darce for what has been a wonderful 11 years in the toughest spot in radio with Triple M Melbourne. The show forged new ground with news making radio alongside our strong sports, rock and comedy heritage and it’s been quite the ride. We are very grateful for the professionalism and loyalty Eddie and Darce have shown to Triple M and our listeners.”

Triple M Head of Content, Mike Fitzpatrick, said: “Eddie has brought a unique insight into our city every day and side by side with Luke Darcy, Mick Molloy and Wil Anderson, they created one of the great breakfast shows of all time. It’s been a pleasure and a highlight to work with this show and the incredibly talented people, both on and off air, who’ve made it.”

Luke Darcy will stay on as part of the AFL footy call team and Eddie McGuire will be back in 2021 with exciting new projects for Triple M.

An announcement regarding what’s next for Triple M Melbourne’s breakfast show will be announced soon.