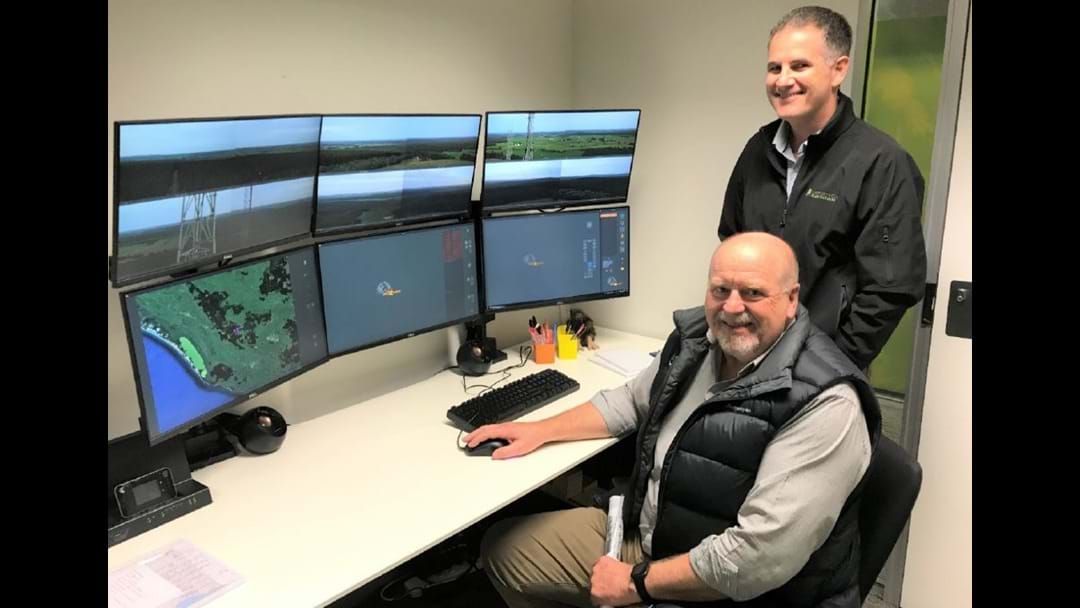 An eager eyed robotic camera with the ability to undertake a 360-degree scan of the landscape is anticipated to enhance fire management across the Green Triangle this summer.

A sophisticated FireHawk camera has been installed on the Bluff communication tower at Tantanoola, halfway between Millicent and Mount Gambier, in an Australian-first to test the capability of the computer aided fire detection and risk management system.

Early results of the $60,000 trial have shown the camera can detect fire up to 30km away, providing industry with confidence the technology has the potential to significantly enhance fire management this coming season.

The camera has been installed by the Green Triangle Fire Alliance, a group representing about 90 per cent of the region’s forest growers, in an effort to provide improved protection for its assets and to guard the broader community.

The camera provides a panoramic scan of the landscape, streaming up-to-the minute 24-hour surveillance. Using artificial intelligence and tailored algorithms, the system sends alerts to fire managers mobile phones when smoke is first identified, allowing for an immediate ground or aerial response. The technology is currently used in countries such as Chile and South Africa as a defence to protect forest and agricultural crops.

Green Triangle Fire Alliance chair Laurie Hein said the local trial had highlighted the potential for a camera system to further augment the existing fire detection systems. He believes cameras will be commonplace fire management tools in the near future alongside other emerging technologies, such as drones and geostationary satellites.

“This technology is one of the more advanced detection tools we have seen in fire management in the Green Triangle since the introduction of digital communication tools,” he said.

“For the first time we will have 24-hour surveillance, scanning the landscape for a fire threat anywhere within the tower radius, providing immediate data to our network of fire managers.

“We know that early detection is critical in managing and suppressing wildfire and this system has the capability of providing a far greater level of defence than we have ever experienced before.”

The forestry sector has invested in the trial following a State Government decision to suspend use of two fire towers, the Bluff and Penola North, due to safety concerns related to their poor structural condition. The forest industry fears this decision will compromise the protection of key assets over the summer season.

Furthermore, the deteriorating condition of the remaining towers raises concerns about the networks long-term viability.
FireHawk project manager Martin McDonald said the camera technology removed the OHS liability for forest growers, who are forced to remove fire spotters from towers in extreme weather conditions, such as high wind or temperature days, as was the case on one extreme fire danger day during the 2019-2020 fire season.

The FireHawk camera provides a 360-degree snapshot of the local landscape.

“Fire agencies, forest and park owners in the past have relied on eyesight and in some cases basic CCTV imagery to assist them. FireHawk is more than this; it is a real time computer aided fire detection service that will accurately locate fire giving distance, bearing and coordinates,” Mr McDonald said.

“The system will alarm a located fire or smoke sighting and place cross hairs on that location until it is cleared by an operator. If a smoke sighting occurs but then dissipates, the fire can still be located as the system gives accurate initial location data. All images are stored on a database that can be accessed as required.

“Users of the system have 24/7 access via Android or IOS devices anywhere in the world to vital local up to the minute images and weather data providing site specific climatic conditions.”

Green Triangle Forest Industries Hub chair Ian McDonnell said the trial was another key milestone for the forest and timber sector who were introducing world best technologies to protect and support the supply chain.

He said the industry could not see a repeat of last fire season, which destroyed 130,000 hectares of plantation forest nation-wide leaving a major gap in future domestic supply.

“It is going to take generations to rebuild timber supply in NSW which lost 92,000 hectares of forest, crippling saw milling operations and devastating the communities they support. We cannot risk that sort of devastating situation occurring here in the Green Triangle,” Mr McDonnell said.

“This new technology will provide a heightened level of response, arming our highly experienced fire spotters with the enhanced ability to spot and coordinate the extinguishing of a fire earlier. Instead of climbing the dizzy heights of the fire tower they will be working in the comfort of an air-conditioned office, working alongside forest managers and fire fighting personnel to protect not only our forest estate, but that of the broader community with a coordinated response.”