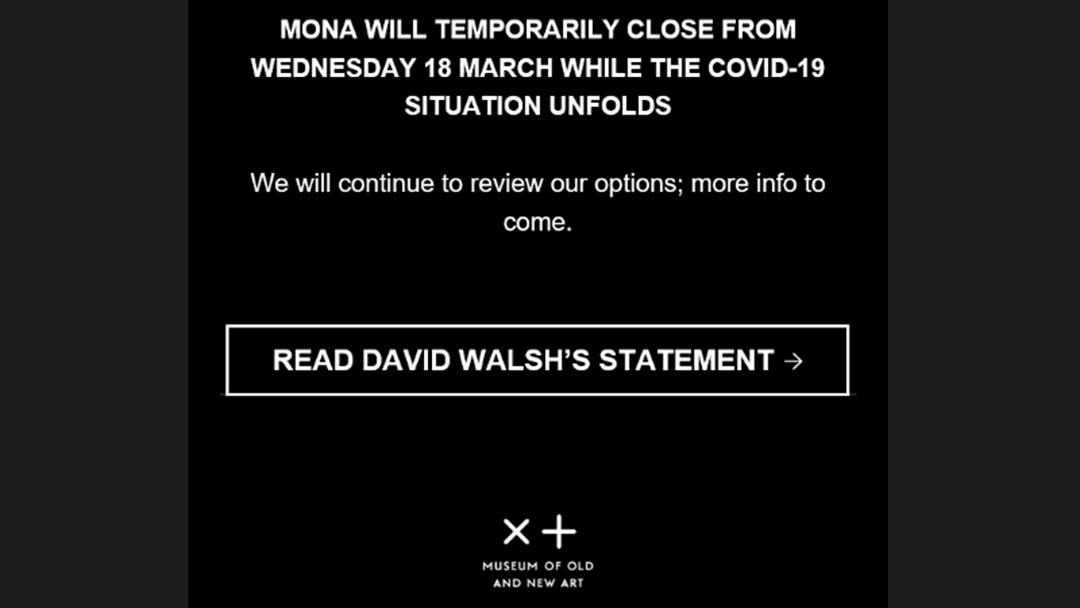 Hot on the back of last week's news that Dark Mofo would not proceed in 2020, MONA owner david Walsh has announced the temporary closure of MONA.

What do you do when you’re trying to predict something that can’t be predicted? Panic may be a legitimate option, but as someone who holds a level of responsibility to the staff and the community, that option isn’t open to me. A good remaining option is the Precautionary Principle. At this point, with some governments enforcing mass closures due to COVID-19, and the Australian Government seeking to limit contact between individuals, Mona faces a dilemma. Taken as a whole, is Mona being operational a net service to the community? Spoiler alert: the answer, as far as I’m concerned, is no.

In a situation where some outcomes, however improbable, cause catastrophic damage to the system and are thus completely untenable, the Precautionary Principle requires me to identify those outcomes and respond to them, rather than to the more probable outcomes that are tolerable. Good chess players play like that: they don’t plan for mistakes from an opponent; instead, they prepare for the best move that the opponent can make.

So let’s play chess against our formidable opponent. COVID-19 could be an airborne pathogen (WHO didn’t think so as of 28 February, but the science isn’t settled); it could become more virulent (viruses sometimes become mixed through swapping material in a host with multiple infections); it could rapidly mutate as does influenza, which would mean that each season you could get a variant of it (doesn’t seem to be happening—there are only two very similar strains); it could cause permanent damage to health (the Hong Kong Hospital Authority observed significantly reduced lung function in two out of twelve ‘recovered’ patients); and a sufferer could infect before he or she is symptomatic or if she or he is asymptomatic (one or both has been observed in people returning to Frankfurt from Wuhan).

If any of those COVID-19 scenarios become true, or is even possible, a great deal of hardship is worth tolerating to contain it. Even if COVID-19 just went on its irksome way as a granny-killing hyperflu, we’d have to take extreme measures. Each scenario is possible, and the evidence suggests a couple of them are likely. It will keep killing, and it will be extremely difficult to manage on a case-by-case basis, so COVID-19 must be checkmated.

On the other hand, people need entertainment. A functioning Mona might provide some much-needed relief from the drudgery caused by the cessation of public gatherings and the consequent elimination of sport, music, theatre and religious ceremonies. Visitors to Mona might be able to preserve social distancing—but social distance is more easily preserved by staying home. I thought about conducting tours, or allowing people to register to be invited when the crowd was appropriately underwhelming. I’ve been trying to find a way to keep going, an option, an excuse. Mona will lose more money closed than open (oddly, we haven’t seen a reduction in visitation) so, unlike Dark Mofo, I’m incentivised to keep it going. And I owe the staff, big time.

But, as you’ve probably guessed, it’s closing. I’ll keep everything together as long as I can, and that should be a long time. I’ll delay building projects and maintenance. I’ll stop taking holidays (not having a choice is a potent motive). I hope people care enough to visit when we reopen. I hope that people care enough to understand why we’ve closed.

Another thing. Schools are still open, kids don’t face much risk, so should your kids go to school? The answer is probably no (yesterday, I said yes; today one of my school-aged kids is at home here in Hobart, the other at school in Sydney). But closing schools might mean more kids with their grandparents. That’s not desirable, given the increased COVID-19 mortality for the elderly. Is there a consequence of closing Mona that I can’t foresee, but nevertheless does harm? I don’t know, but I’m closing Mona. I’m closing it, without certainty and with some loss of pride, but I’m closing it.

A second-last word. This is a Nassim Taleb quote that summarises why I think that everything that can close should close:

Precautionary decisions do not scale. Collective safety may require excessive individual risk avoidance, even if it conflicts with an individual’s own interests and benefits. It may require an individual to worry about risks that are comparatively insignificant.

In other words, you can’t wash your hands of washing your hands. Monty Python inadvertently encapsulated my strategy more pithily:

When danger reared its ugly head, he bravely turned his tail and fled.