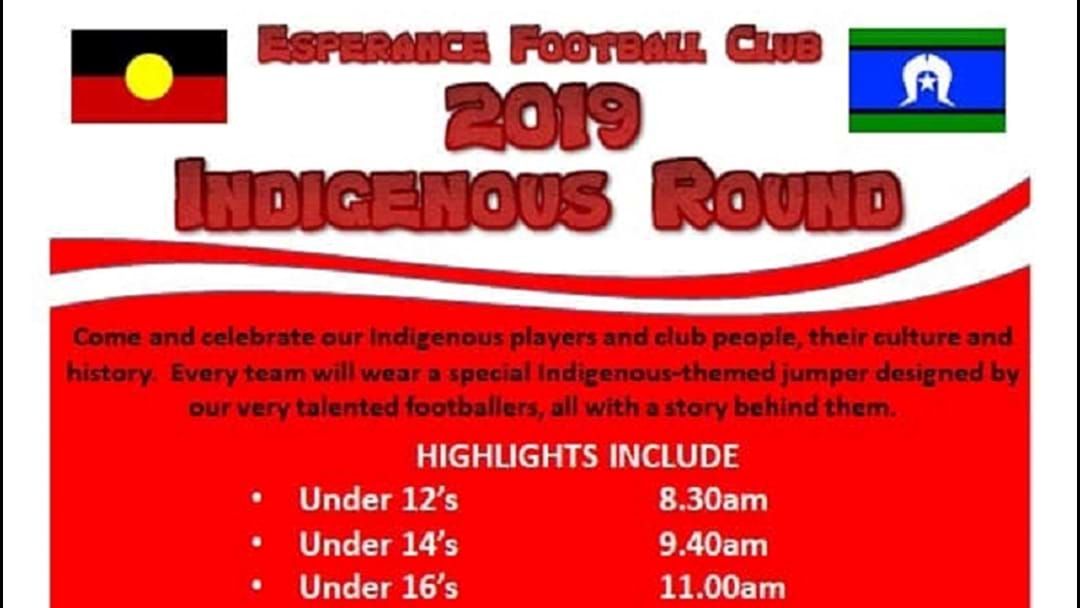 This weekend will be a special occasion for The Esperance Football Club, who are celebrating Indigenous Round for all the Bulldogs players from under 12s to the senior teams. To add to that both games of Round 10 are shaping up to be important contests in the context of deciding finals fixtures.

Indigenous Round at Esperance Oval kicks off at 830am with the juniors running all morning. Each team will be donning a unique indigenous Esperance jumpers with the art work designed by local footy players each telling their own special story acknowledging the culture and history of our First Peoples. They look amazing so make sure you get down to the ground to check them out and ask about the meaning behind the separate designs.

An ‘Acknowledgement to Country’ and ‘Welcome to Country’ are scheduled for midday and quarter past three prior to the Colts and League games respectively.

War cry dances are a celebrated part of indigenous culture, and will be carried out by Bulldogs players at the intervals of the afternoon games. For the kids (and the big kids) face painting will be available to really get into the spirit of the day,

Fingers came on to the Sean for Breakfast Show and discussed Indigenous Round, as well as the recent Landmark Footy Carnivals in Perth that had rep players from Esperance.

In terms of the league fixture, it is a massive game for both Esperance and Ports. If the home side win this game they all but guarantee second position on the ladder and a second chance come finals. A loss puts the Doggies under some pressure against an inform Newtown-Condi next week who are only a couple games off second place. Ports will be desperate to beat their crosstown rival and make up some ground on the Lions. They are currently two games clear in fourth position.

Gibson are the only team to have inked in their final position on the ladder, four games clear on top at this stage. They come up against Newtown-Condi at Gibson Oval, with the away side knowing that early goals is pivotal to staying in the contest and possibly snatching a win. The Tigers blew the Lions away in the second half the last time they met at Newtown oval, so the Lions know they need to be within a kick or up at three quarter time, and hope they can overrun a fit Gibson side who could lose confidence without a final term lead. Gibson were hardly convincing against Ports last week, with Newtown-Condi falling devastatingly short against a desperate Bulldogs outfit.

As we head into the final three games of the season, now is the time for teams to kick into action. Building momentum with three wins for either four sides won’t only put the players in a confident mindset heading into the pointy end of the season, but may also mean the difference between a home or away final and a second chance of an elimination final.

We watch the round with great interest!