Infections Balloon Across NSW As New Testing Campaign Kicks Off 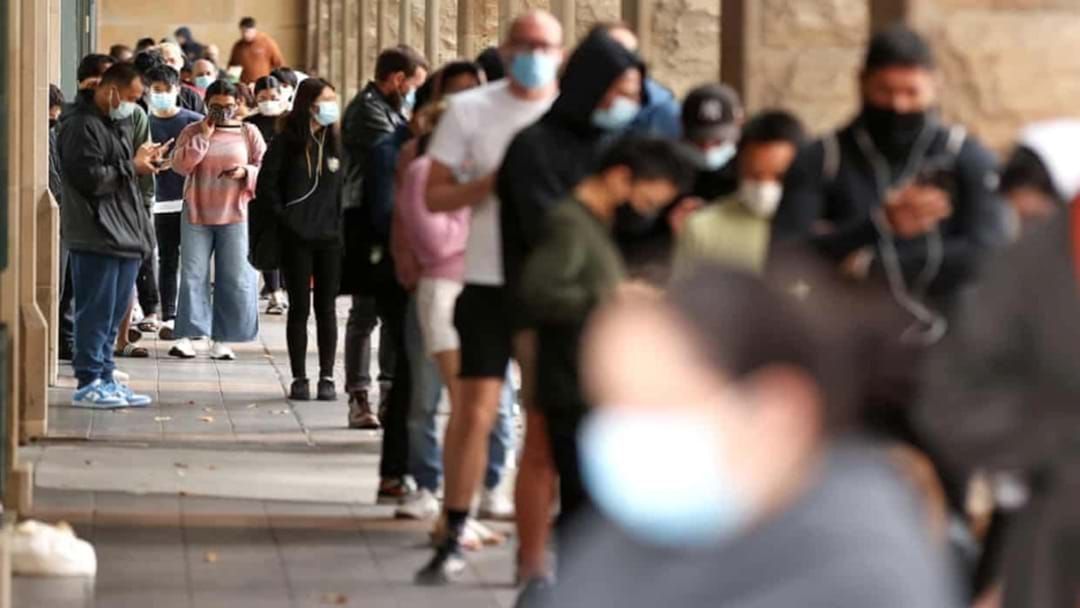 Almost one in three people returned positive results detected from 108,844 swabs collected on Tuesday, as people braced the heat in queues at testing sites.

Stay up-to-date on the latest news with The National Briefing - keeping you in the loop with the news as it hits.

There are currently 1491 people in hospital, with 119 of those are in ICU.

The rapid surge in hospitalisations continues to gain momentum, with reported admissions more than doubling, up from 625 patients with Covid one week ago today.

In NSW, more than 93 per cent of people aged over 16 are now fully vaccinated, while 95 per cent have received their first dose.

Meanwhile, billboards and mobile phone alerts have been rolled out this morning in bid to clarify new testing rules after a raft of confusing messages left people uncertain over what to do.

In addition, NSW residents must continue to check- at in high-risk venues despite QR codes and the Check-in app no longer being used to identify close and casual contacts of positive Covid cases.

Users will continue to be alerted when they have been near a positive case, telling them to “monitor for symptoms”.

Authorities are urging people to only get tested if they have symptoms or have been advised by health authorities to do so.

Professor Sharon Lewin, the director of the Doherty Institute has agreed with popular opinions that people should not have to pay for rapid antigen tests.

“We’ve now begun to heavily rely on antigen testing which I think makes sense when we have such big numbers, and the shortage of antigen tests is a real problem at the moment, and I think also access to those tests really has to be free,” she told ABC TV’s 7.30 program.

“So if we’re going to rely on antigen testing, and I think we can do some really innovative things with antigen tests and it may even give us additional freedoms in certain situations, they really have to be widely accessible and free.”