INJURIES plague Round 4 of Esperance Footy

Hepburn Medalist with a dodgy ankle 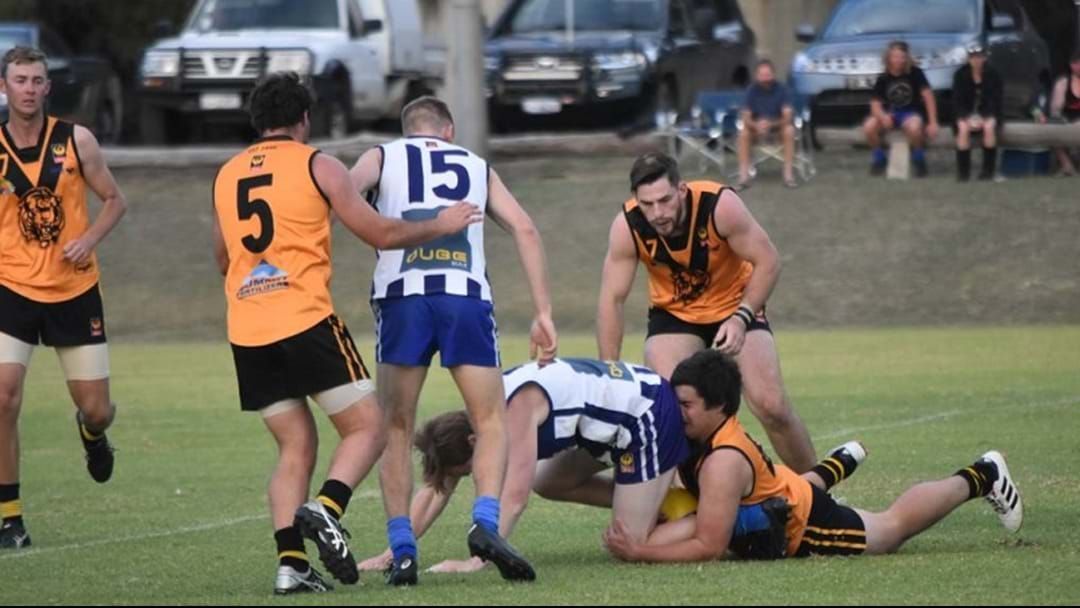 Courtesy of the Esperance Express

Injuries marred an otherwise entertaining round of football in the EDFA’s ‘Thank and Respect the Umpires Round’ last weekend, including last year’s Hepburn Medallist who succumbed to an ankle injury in the heat of battle against Newtown-Condi on Saturday.

Brendon White will have scans on his injured right ankle after it was caught and twisted underneath Newtown-Condinup captain Jake Oversby in a tackle in the dying stages of the third quarter. White, who captains the Bulldogs and is their chief play-maker in the midfield, has had ankle issues in the past but may not have ever experienced the same amount of swelling, with the end of his foot ballooning out to resemble some sort of lumpy eggplant.

It leaves the door open for the Hepburn Medal, with the other favourite and last year’s runner-up Patch Jannings on the sidelines with knee injury. Recent form suggests Gibson midfielder/forward Travis Stewart will take the mantle, although there is still plenty of country football to play out.

The Lions were only 13 points adrift at the main break, with Trocinski and McArthur busy little bees up forward, but the Bulldogs pulled away after another strong third quarter that saw them kick four unanswered goals, and then continue their momentum into the final quarter were again the outscored their opponents.

Griffiths was good for the Bulldogs, although he packed to left shoes to the ground with his accuracy waning in front of the big sticks. Kaden Neill has relished a new role this year and performed strongly. Jordan Cummins was best on for the Lions.

Umpires will have to watch these two teams closely the next time they go at it, with several altercations leading to cards on several occasions across the game. It seems the two teams have a history of argy bargy with similar incidents playing out last year, apparently they simply do not like one another.

Injuries to the Esperance footy club to White and McPhee, including three other league players exclusions this week will give opportunities to the reserve and colts players coming through. Newtown-Condingup will also welcome back quality players to put pressure on the current squad and give them a sniff in the coming round.

Reinvented forward kicks 10 as home side dominates an injured Ports

In the other match of the round Gibson rolled over a depleted Ports team who were effectively left with 16 fit players after quarter time at Gibson Oval.

Gary Walaby sparked the away side with the first two goals of the game, with Zac Liddlelow dominating early. It was a courageous effort from Hudson Fyfe which would pave the demise for the blue and white, he backed into a pack and was ‘hit by a Walaby’, injuring his shoulder and being knocked out in the process, requiring an ambulance. He was released from hospital later that evening with minor injuries.

Curnow and Walker played on injured and Liddlelow was concussed as Ports were reduced to no bench in the second quarter, and from there things got messy.

After half time Gibson marched on with 20 unanswered goals, with Stewart (mentioned above) and McFarlane kicking 10 and eight for the game respectively, on the left, on the right, from the boundary upside down and on the run, they kicked truly.

New recruit McCallion may have brought his own footy for the game, relentlessly plucking balls from packs. Curry relished his new responsibility as captain, he was joined by Bowman and Staunton who had suburb games on the guts, overrunning their opponents and displaying sublime skills.

Johnston was a nail in the thorn of the Tigers, once again illustrating his worth down back. Max Witham was also solid, showing composure throughout the onslaught.

While the final score line flatters the home side Gibson, there is a lot to be said by the gallant and determined effort from the Ports boys, who will no doubt finish the year with a couple upsets to their name.