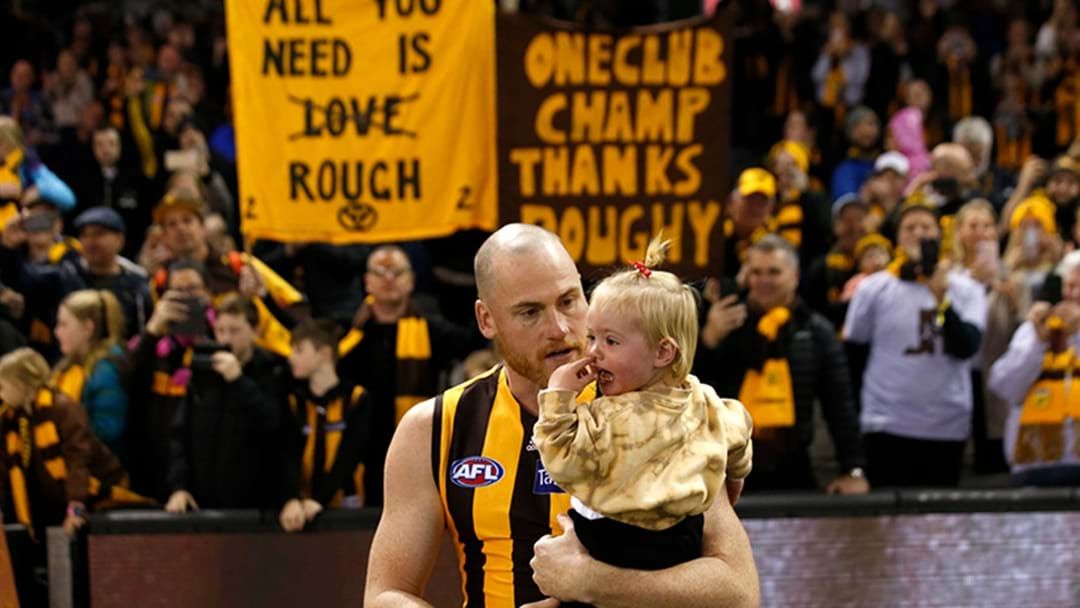 Jarryd Roughead spoke to the Hot Breakfast this morning about his new autobiography — including a section detailing how annoying journalists were to him when they thought he might leave Hawthorn.

Ed read out the section with Roughy on the phone this morning.

“There was speculation at some stage that you might have been moving fromt he Hawks, there was talk that you’d been seen having breakfast with Luke Beveridge to go to the Bulldogs, you might even come to Carlton or Collingwood even,” Ed said

“It then goes on, quote, ‘It seems like every time I was bathing [daughter] Pippa, Mark Stevens or Tom Browne were on TV screen in my living room saying, quote, the jungle drums are beating, Roughy’s leaving Hawthorn.

“‘These blokes camp outside of footy clubs, staring down the camera saying “sources tell me this could happen” — they don’t know!

“”I’ve always said they should get a show going where players hide behind trees and nab some reporter while he’s walking the Tan track on his day off — the player jumps out and asks the reporter a load of bullshit questions, that’d be better than some of the crap they do!’”

Roughy said he was never really a chance to leave the Hawks.

“I was never catching up with other coaches of other clubs or anyone to try and say ‘yep, I’ll come to you guys’ or think that I was ever gonna leave Hawthorn,” he said.

“I mentioned it to Dewy (Stuart Dew) because he was a close mate, but again I was never one to think I’ll go to Gold Coast and finish my career… I think he, as a friend, was more a sounding board for me because of what I was going through.”