AFL NewsLocal Cricketer Pulls Out The Most Ridiculous Solo Effort Ever

Local Cricketer Pulls Out The Most Ridiculous Solo Effort Ever 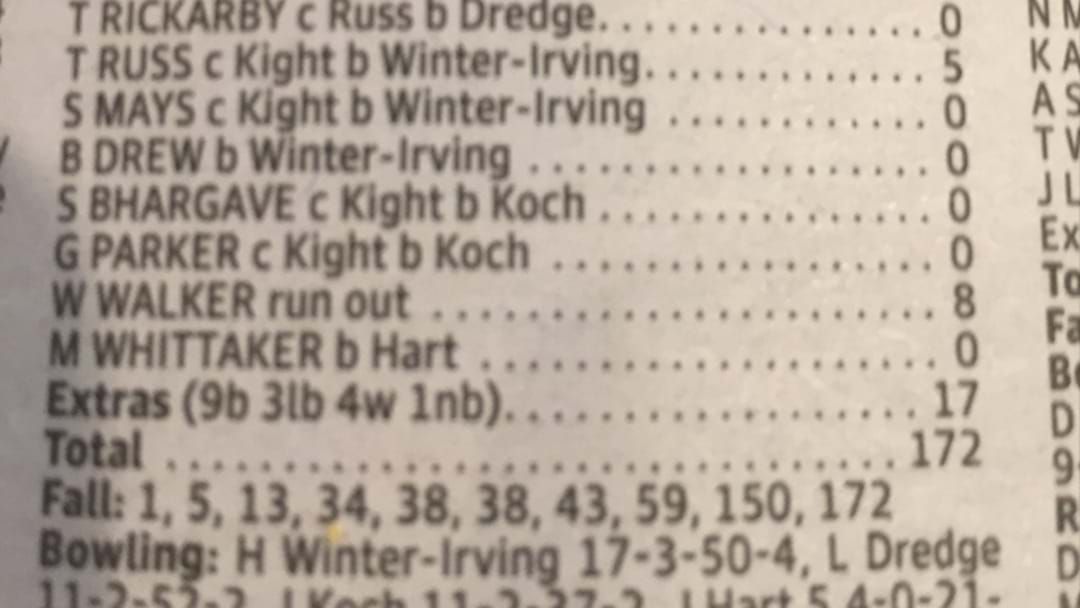 Bannerman earned fame for scoring the first ever Test century - a ridiculous 165 out of Australia's 245 all out against England in 1877, or 67% of his team's runs.

This effort by Camberwell batsman Simon Hill yesterday might have him covered.

Hill, coming in at 1/1 for Camberwell yesterday in their Victorian Premier Cricket match against Footscray Edgewater, pulled out an even more ridiculous innings.

Seven ducks fell in an innings where Camberwell was in strife at 8/59, before Hill put on a 91-run partnership with Will Walker, who made a fine eight.

Outside a glorious contribution from extras (17), Walker's eight was the second highest score.

“Records show nobody has ever seen anything like what Hilly did on Saturday, it was pretty impressive and got us out of a bind," Camberwell captain-coach Brendan Drew told News Corp.

“One critic he’s maybe had over his career is how many tough runs does he get and as I said after the game that’s the best innings I’ve ever seen in terms of toughness and doing what you can for the team.”

Footscray Edgewater was 8/112 in reply, which may give Hill the honour of outscoring his entire opposition when they return next Saturday.

What looks more likely: he might have single handedly given them the win.