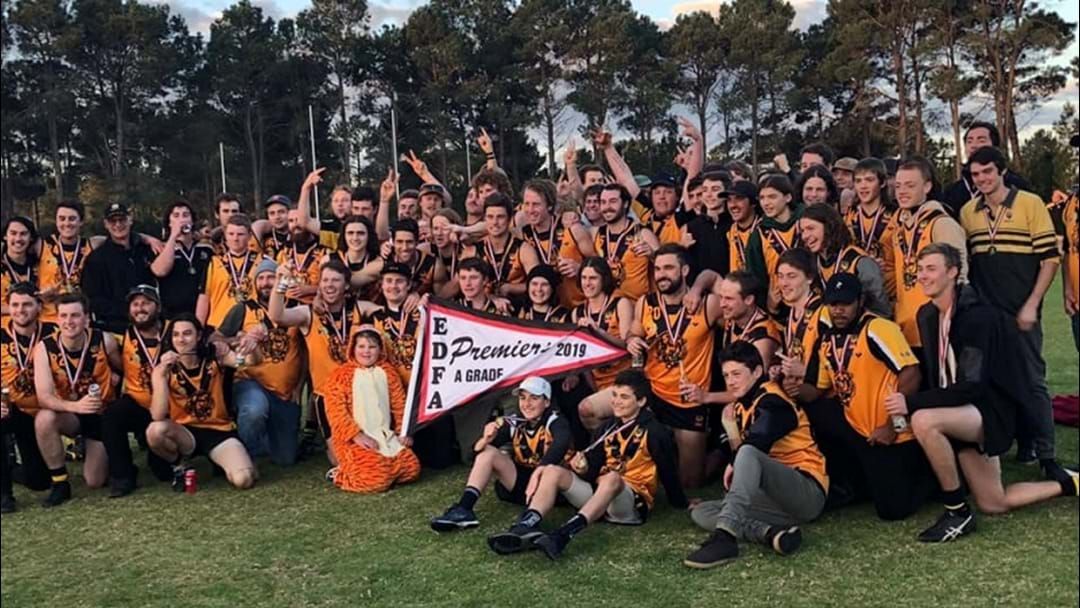 The Gibson Football Club have had arguably their most successful day in club history, winning four out of a possible five premierships on Grand Final day on their home turf Gibson Oval last Saturday. The day culminated with an entertaining and tough league game, which saw the reigning and minor premiers outplay the Esperance Bulldogs and secure the premiers mantle by 27 points.

Eager spectators arrived at Gibson Oval just before 8am for the start of the Under 14s to be played out by Gibson and Newtown-Condingup. Gibson would end up the eventual victors in this contest, opening a ten-point unassailable half time lead after both teams shared a goal in the first quarter. The Tigers would increase their advantage over the Lions in the second half with to fourteen points, the final margin come the final siren. Gibson’s Pechar was the only multiple scorer for the game, Strickland and Ellery scored singles for the home and away side respectively.

The Ports Footy Club have a strong future, if there Under 16s side is anything to go by. They won their Grand Final by seventeen points over a fast finishing Gibson outfit. Unusually it was the second quarter that was the premiership one for the Blues, they kicked four goals to zero to open out a 22-point lead at the main break. The away side would extend that to thirty points in the final point and despite a gallant effort from the Tigers in the last quarter the black and yellow couldn’t overcome the deficit. Riley Mayfield was outstanding for the premiers, his three-goal haul alongside the three Mibus kicked pushed the Blues over the line. Mayfield was a deserved BOG recipient.

It was a low scoring affair in the Colts Grandy, highlighting just how difficult the conditions were and how hotly contested this game was. Gibson broke away to an early lead, going into quarter time with a two-goal buffer. Whilst Newtown-Condi boasted a star-studded line-up, with Tholstrup and Wagenknecht just a couple of Lions who had run around in the league side this season, they could only manage one goal per quarter and were unable to retrieve the fourteen-point deficit at three-quarter time.  Pat Quinlivan’s elite skills were important. Not one single player kicked multiple goals.

An unbeaten Gibson Reserves side were concerned early as their Esperance counterparts got the jump on them and opened an early lead with the Bulldogs 1.4 to 0.0 at quarter time. The Tigers had rarely been challenged this year and clicked into gear with the wind in the second quarter, kicking three goals to one to be up at the main break by the finest of margins, one point. Gibson controlled the game from there extending their lead to fourteen at three quarter time and 23 points at the final siren. Tiger Full-Forward Tyson Tate won BOG, he was a class above the rest in the forward line and finished with four goals. Brody Grant was busy with two and Digby Harris was strong for the home side early. Esperance stalwart Ryan Neill kicked two goals for the Doggies and was a threat all day.

The final match of the day was a Grand Final replay from last year. Gibson were the minor premiers and had suffered only one loss for the year, a brutal forty point Second-Semi Final thrashing at the hands of Bulldogs at Newtown Oval. The day was shaping up as the perfect revenge for Esperance, after Gibson broke their six-year premiership domination last year on their home turf now it was the Dogs turn to try inflicting a home defeat on the Tigers.

Gibson won the toss and chose to kick against the breeze and were rewarded with a strong start to the match. The Tigers kicked the first two goals, won thanks to a silly down the ground free kick with put the Gibson forward a fifty-metre penalty and a direct shot from the line for the easiest of majors. The Bulldogs wrestled back the ascendency and would rue some wasted chance, kicking 1.5 with the wind advantage. The home side kicked a late goal to lead the quarter by nine points and gain invaluable confidence.

The Tigers started strongly again in the second quarter and would increase their lead going into half time. The home side kicked 2.7 in the second to Esperance’s 1.3 to finish on 39 to 14 and a lead that would prove to be the difference become games end. Gibson could have really asserted their dominance but some missed opportunities in front of goal was telling.

Esperance worked tirelessly in the third, with their Captain Brendon White injected into the midfield to add some class and grunt. Esperance were close to breaking the game open, but Gibson were able to find an answer when needed. Tensions escalated until it boiled over at three quarter time, with a big brawl resulting in a Bulldogs defender receiving a yellow card.

The Dogs started the final quarter and surged hard to will their boys into the contest, but some desperate defending held the away side at bay. Gibson would steady with two goals, the sealer from Patch Jannings and a final goal from Giles McMeikan and the Tigers would finish premiers, up by 27 points.

Jonah Symonds was the Bulldogs best, with their captain not too far away.  The players will rue inaccuracy in front of goals and ill-discipline, which cost them throughout the contest.

For the home side it may be the first time a Tigers league team has won at Gibson Oval. Patch Jannings was good on the ground and in the air and his goal sealed a complete performance. He won BOG. McFarlane was a strong presence up forward and kicked three goals, the most of any player during the game. McCallion threw his body at the contest and was skillful to the end. Bridges won his aerial match up and got stuck in tirelessly. Kudos to the backs who held up with strength and skill despite regular pressure.

A convincing performance after a convincing year for the black and yellow.