NewsMichael Hutchence's Brother Is Pushing For The Hutchence Statue To Live In Sydney, NOT Melbourne

Michael Hutchence's Brother Is Pushing For The Hutchence Statue To Live In Sydney, NOT Melbourne 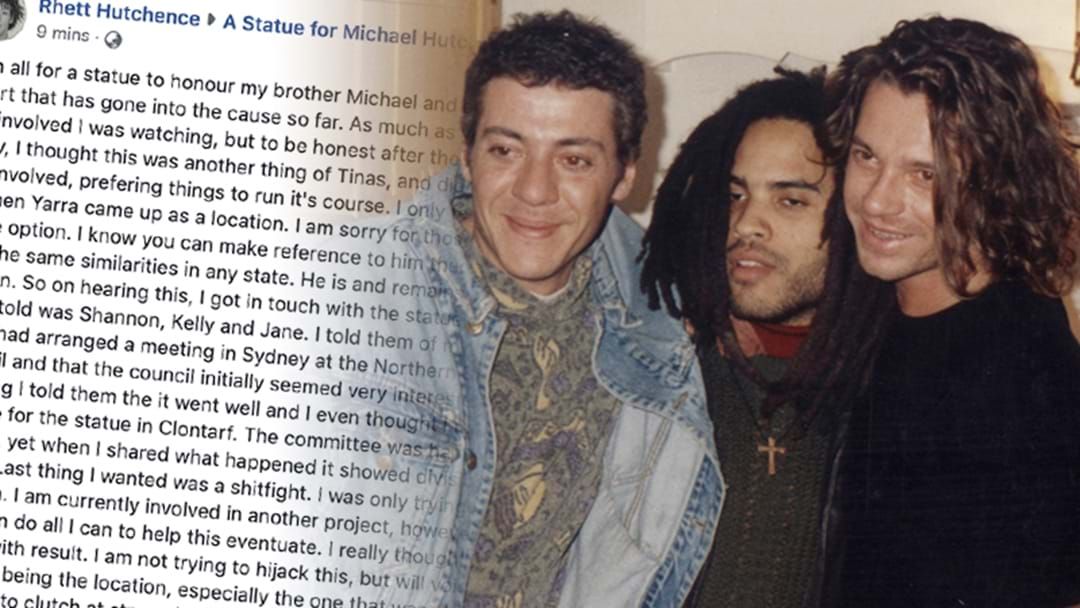 There's always been a Sydney v Melbourne thing going on since, well, forever, and once again there's a territorial stoush going on over where is the right place to erect a statue to honour the late great Michael Hutchence.

As we've been reporting for the past year or so, it's been looking like a statue to honour the INXS frontman was to be built in Melbourne's Richmond, very close to where a statue of Molly Meldrum already resides.

The statue, essentially the product of people power via a social media group, was pretty much set for approval when Hutchence's brother, Rhett, posted the following to the A Statue For Michael Hutchence Facebook page.

In essence, he's making a last ditch suggestion to place the statue in Hutchence's hometown of Sydney.

As the post suggests, not everyone is on board with the idea of the statue being in Sydney, despite the suggestion that the statue could appear at a picturesque part of the harbour (Clontarf) where INXS filmed the clip for one of their iconic earlier hits, Stay Young.

Of course, it seems Australia is about to be reintroduced to the magic that was the legendary INXS rock star, as the documentary about his life, Mystify: Michael Hutchence, is about to be released on us. It hits cinemas on July 4, with a whole bunch of preview screenings already in the can.

Time will tell as to where and when this statue will be located. Who knows, there may very well be two statues erected?