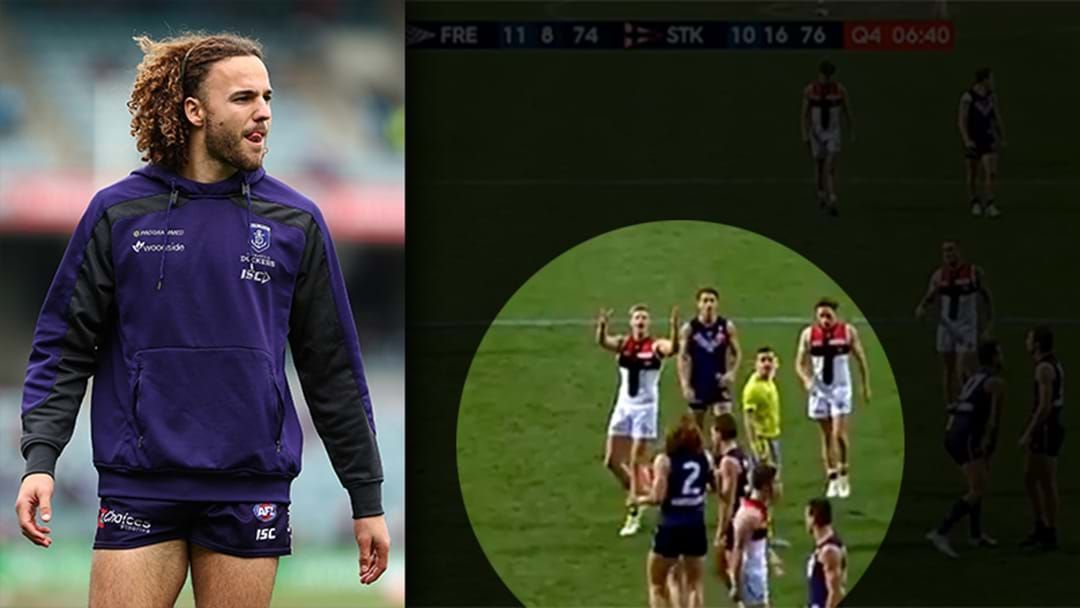 In one of 2017's most heartbreaking moments, Fremantle young gun Griffin Logue got sucked in by St Kilda champ Nick Riewoldt to give away a vital 50-metre penalty over the weekend.

It has since come to light that Roo was Logue's favourite player growing up - having previously been a St Kilda supporter - as revealed in the Docker's player profile.

Riewoldt joined The Winter Breakfast on Triple M this morning to discuss Maddie's Match against Richmond this weekend and the topic came up.

"We know you as immaculately prepared Nick,” Mark Howard said.

"Were you aware of his love for you and thought ‘I can get him and get him royally here’ - I know how well you prepare, does it go to this extent?" he asked.

"No it doesn’t. I’d like to be able to claim that level of preparation," Riewoldt laughed.

"But to be honest, this sort of stuff happens every week where players try this."

"Generally players are pretty aware of the rules and don’t fall for it."

"I guess that’s one of the advantages of playing for 17 years!"

Lawrence Mooney asked if there was any exchange between the pair regarding the incident.

"Just a handshake, as usually happens after a game," Riewoldt said.

"Good luck to the young fella in his first year - he’s got a long, exciting career ahead of him."

St Kilda play Richmond this weekend in the annual Maddie's Match on Saturday to raise money for Maddie Riewoldt’s Vision.