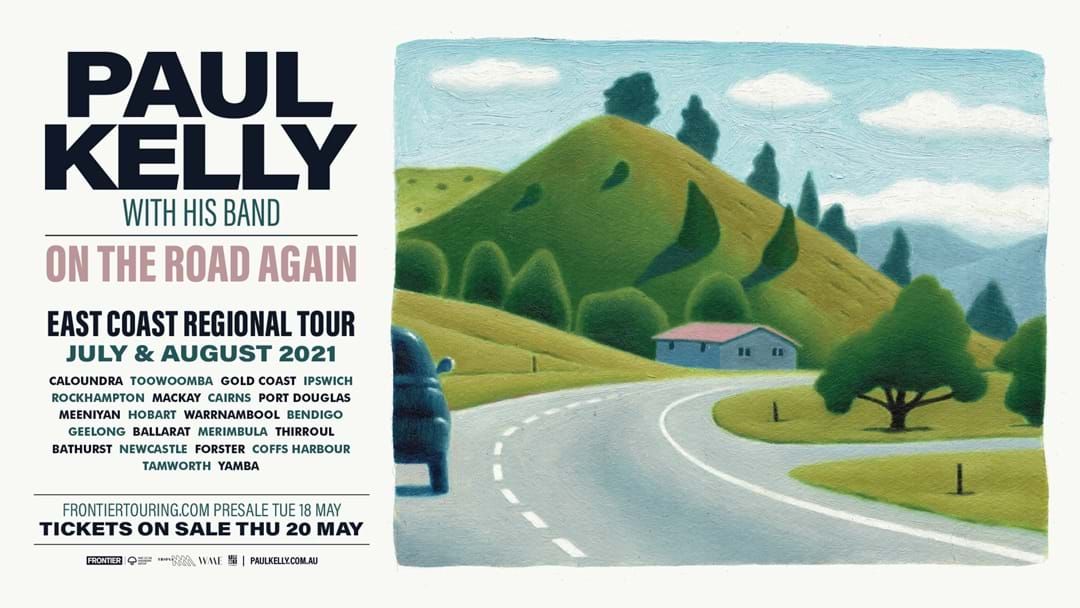 Frontier Touring are thrilled to announce that revered Australian singer-songwriter Paul Kelly will be joined by his band to embark on their On The Road Again tour this July and August.

The tour will see Kelly and his band tour regional towns and cities across the Australian East Coast, performing to 24 audiences over two months.

Kelly’s band will be joining him on all tour dates, including Vika and Linda Bull, Bill McDonald, Peter Luscombe, Ash Naylor and Cameron Bruce.

Inducted into the ARIA Hall of Fame in 1997, Paul Kelly is distinguished as one of Australia’s greatest performers and songwriters, with a prolific 25 studio albums, multiple film soundtracks, and two live albums to his name. 2017’s Life Is Fine saw Kelly finally achieve his first ARIA #1 album, also earning him ARIA Awards for Best Male, Best Adult Contemporary Album, Best Cover Art and Engineer Of The Year.
In the height of the 2020 lockdown, the renowned performer got to work performing on Channel Nine’s Music From The Home Front, ABC’s The Sound TV series and the Victorian Government’s The State of Music livestream as part of the Victoria Together Initiative.

Hear the man himself, Paul Kelly, talk us through some of his hits:

Never stopping, in 2020 Paul Kelly also released the album Please Leave Your Light On with Australian pianist and composer Paul Grabowsky. The studio album features twelve adaptions of Kelly’s originals, with Grabowsky describing the collaboration as primarily driven by a mutual and ongoing “fascination with music in its many forms”.

Frontier Members can access their pre-sale from Tuesday 18 May, before tickets go on sale to the general public on Thursday 20 May. Secure tickets early to avoid missing out!