The Fooies rocked the house! 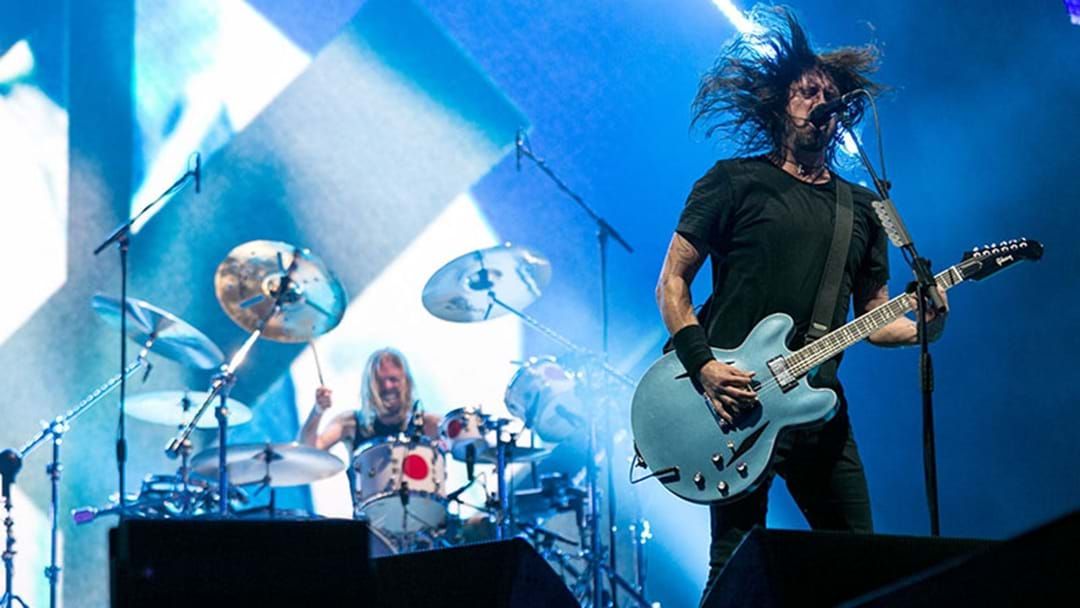 A sneaky gauge of how big Foo Fighters are, is the amazing support act they seem to always have with them.

The second last time they played NIB, they brought Jack Black’s hilarious (but totally rockin’) Tenacious D for the ride.

This time it was Weezer, who warmed up the crowd beautifully with legendary tracks like Hash Pipe, Buddy Holly and Island in the Sun — what a ripper way to start the evening!

By around 8pm, the crowd was fangin’ for some Foos as one of Perth’s famous summer sunsets developed behind them.

It’s almost 3 years since the guys were here, and it felt like the band were keen to just get crackin’ too.

They ripped right into Run, followed by All My Life, Learn to Fly, and The Pretender.  It was a blistering opening onslaught, which continued with The Sky is a Neighbourhood from the new Concrete and Gold album, and the chunky riffage of Rope from 2011’s Wasting Light.

It wasn’t until about 7 songs in that Dave Grohl — and the rest of us! — got to take a bit of a breath, as Taylor Hawkins demonstrated some drum-kit prowess (I believe he has a new drum kit he’s very proud of).

Taylor also briefly took over vocals for the song Sunday Rain, the album version of which features Dave’s mate Paul McCartney on drums.

Speaking of drums, one of the highlights of the set was Dave Grohl jumping behind the kit – just like in the old days!

For folks like me who grew up on Nirvana, and loved Dave’s drum-work with Queens of the Stone Age, it was a treat to see him pounding the skins again as they cranked out a cheeky cover of Queen and David Bowie’s Under Pressure, with Taylor Hawkins once again taking over vocal duties.

Similar to the last tour, there’s a huge walkway extending out from the stage, into the crowd.

Dave Grohl likes to get up close to the fans, so he strolled out to tell us a few stories, like the bout of food poisoning he had just prior to his last Perth visit (gross!) and how he was cured by drinking a Guinness — “it has medicinal qualities” he told the crowd.

Dave also relayed the story behind the song Ballad of the Beaconsfield Miners, and how he’d (drunkenly) promised the rescued Tasmanian miners that he’d put a song on a Foo Fighters album for them.

He delivered back then (on their 2007 album Echoes, Silence, Patience and Grace) and he delivered a touching acoustic rendition of the tune tonight, followed by a cover of The Beatles Blackbird. Oh and Dave made some kid’s year when he dedicated My Hero to a young bloke in the crowd. Nice.

After a couple of hours of high-energy rock, things came to a head with absolutely cracking takes on Best of You and Monkey Wrench.

If the set had ended there, we could have walked away happy.

But of course, as I said to my concert-going-buddies “they have to come back out and do Everlong, they just HAVE to!!”

Of course they did, and the crowd went off!

It was part of an encore that also included Times Like These and the bloody classic This is a Call from the debut self titled album, from all the way back in 1995.

Yep, It’s sometimes hard to believe that Foo Fighters have been rocking the planet for around 22 years now.

But if this first gig of the Aussie tour is anything to go by, there’ll be no stopping them any time soon!