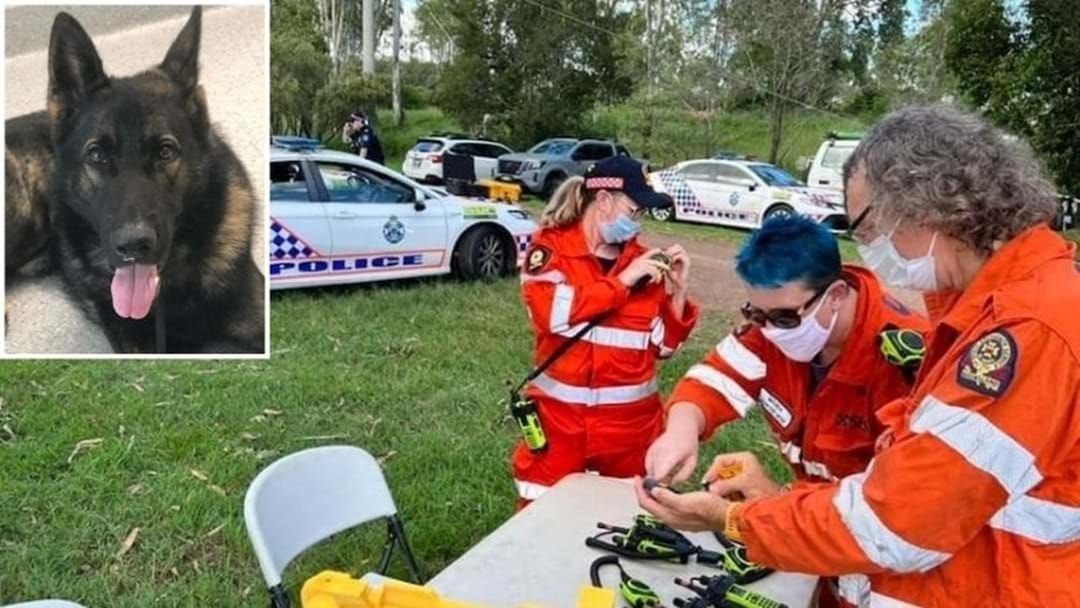 Locals have joined police search teams and helicopters in their search for missing polie dog PD Quizz who was separated from his handler while pursuing a car thief in dense bushland.

The three-year-old German shepherd went missing at around 3AM on Tuesday morning after the dog and his handler were called to a scene in Ipswich to search for a man who is alleged to have run from a stolen vehicle.

According to Senior Sergeant Steve Lindsey, the duo was chasing a man through dense bushland close to Greenwood Village Road in Redbank Plains.

"Very uneven tracking conditions, there's a lot of old mine sites and things like that around here and very heavy bushland," he said.

"[The dog handler] became momentarily separated from the dog and the dog has just continued."

"Too often we're a bit robotic about these things; yes, he's a working police dog … but he's also a partner of the handler," Senior Sergeant Lindsey said.

"We tend to forget a little bit about the family; the family is also feeling the pain of the dog being missing as is the whole police family."

A huge rescue team has been launched to search for PD Quizz including SES, Polair and civilian volunteers.

Inspector Michael Thiesfield has warned anyone who spots PD Quizz not to approach the. dog but to instead call police.

"We believe that the police dog isn't dangerous, but we ask members of the public not to approach," he said.

"We'll continue searching throughout the day going into the evening.

"With the assets we've got available from the air … the mounted police, the SES, the police, the dog squad that hopefully we'll get the resolution we're looking for at some stage today."

Senior Sergeant Lindsey is urging anyone with information as to the dog’s whereabouts to come forward and to check their property for any sign of PD Quizz.

"I'd like to reach out to the public to dig deep, check your backyards, reach out to your neighbours, ask them if they are aware of the search," he said.

"Obviously our concern is that the dog has been missing for 24 hours.”