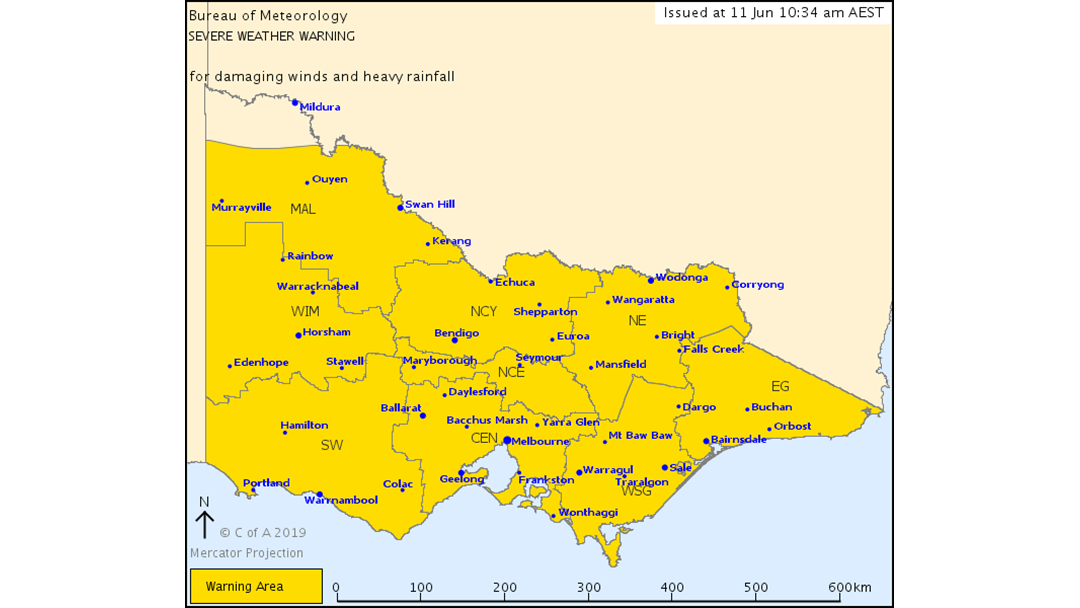 A severe weather warning for damaging winds and heavy rain has been issued for parts of the state tomorrow. Make sure you drive to the conditions, don't park under trees, secure loose items and stay informed: https://t.co/BIpXTILzT2. pic.twitter.com/B25vTOYOGl

DAMAGING WINDS, averaging 60 to 70 km/h with peak gusts of around 100 km/h are possible mainly in elevated areas in the west of the state from early Wednesday morning. Wind gusts increasing 100-110 km/h, again mainly in elevated areas in central Victoria and up to 120 km/h about the northeast Alps during Wednesday morning. Lesser chance of wind gusts to 100 km/h in areas less than 1200m.

Winds are expected to gradually ease from the west during Wednesday afternoon.

Thunderstorms with HEAVY RAIN which may lead to FLASH FLOODING is possible early Wednesday morning in the southern Mallee and Wimmera.
Locations which may be affected include Horsham, Warrnambool, Bendigo, Shepparton, Seymour, Maryborough, Ballarat, Geelong, Melbourne, Wodonga, Wangaratta, Traralgon and Bairnsdale.

The State Emergency Service advises that people should:
* Move vehicles under cover or away from trees;
* Secure or put away loose items around your house, yard and balcony;
* Keep clear of fallen power lines;
* Don't walk, ride or drive through flood water;
* Keep clear of creeks and storm drains;
* Be aware that in fire affected areas, rainfall run-off into waterways may contain debris such as ash, soil, trees and rocks;
* Be alert that in areas recently affected by fires, heavy rainfall increases the potential for landslides and debris across roads;

The next Severe Weather Warning will be issued by 5:00 pm AEST Tuesday.