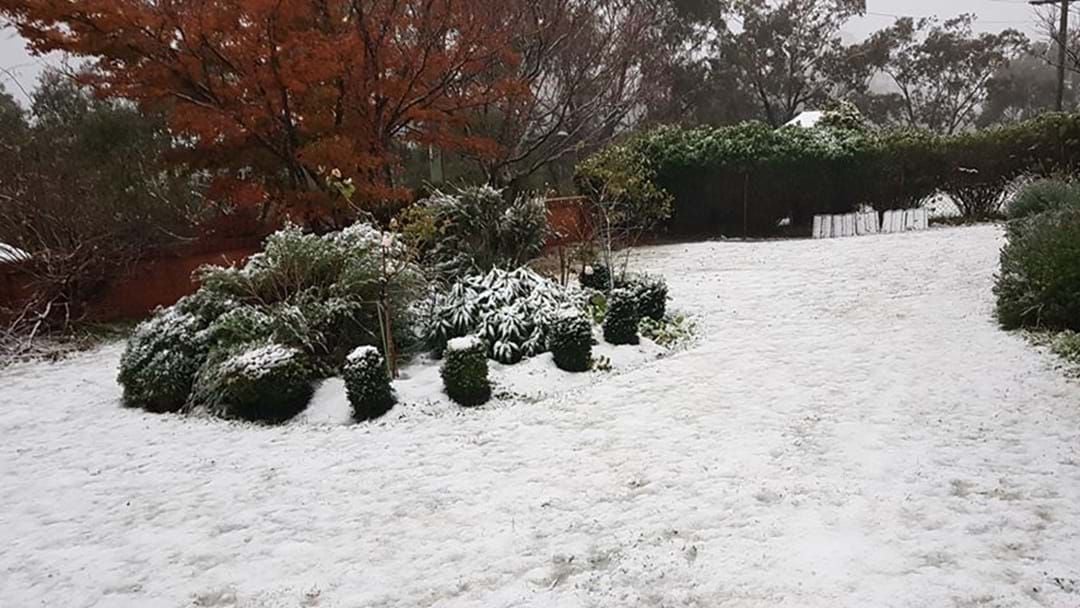 A blanket of white snow has covered parts of the iconic Blue Mountains while the NSW coast is being battered by strong winds and rain.

About five centimetres of snow settled on Katoomba, Blackheath and surrounding areas on Tuesday morning, as a burst of cold weather hits the state.

"It's enough to cause road issues and enough to fold the branches of the trees from the weight of the snow," the Bureau of Meteorology's Jordan Notara told AAP.

The ice and snow temporarily forced the closure of the Great Western Highway at Katoomba, Mount Victoria and Blackheath, as well as a section of the Bells Line of Road.

Snow also affected several local roads in the Central Tablelands and Snowy Mountains, with falls recorded in Oberon, Lithgow, and Armidale in the state's north.

Drivers are being advised to avoid or delay travel unless necessary due to the conditions.

The white dusting, however, is expected to only be short-lived as skies clear and winds melt the snow.

Meanwhile, Sydneysiders are being warned to take care with damaging and destructive winds set to lash the coast later on Tuesday.

The bureau says an intense Tasman low and associated cold front will produce winds of between 60 and 70km/h, with peak gusts of more than 90km/h.

Ulladullah, on the south coast, recorded a wind gust of 130km/h just before 4am on Tuesday - the highest in its nine years of data.

NSW Police are urging drivers, riders and pedestrians to stay safe as the wild weather hits.

Assistant Commissioner Michael Corboy said roads will be slippery and visibility poor, and stressed the need to go slow and follow directions.

"It's not just your life at risk - it's the lives of the emergency service workers some of whom are volunteers," he said in a statement.

The bureau has issued a warning for those driving in Sydney's eastern suburbs, with gusty winds expected to make conditions dangerous.

"Motorists are advised to take extreme care," it said.