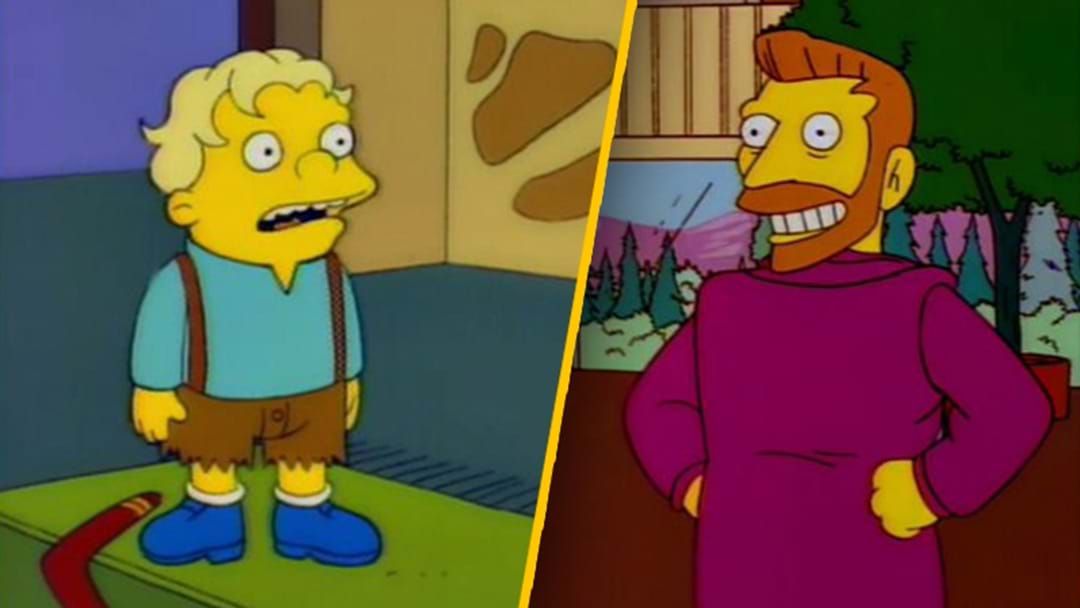 Join Rudi, Will and Ethan as they count down the top 5 today, including some angry candy conventioneers, a super villain seizing the East Coast, a trip to Australia, Sideshow Bob’s rendition of the score from HMS Pinafore, and an ill-fated light rail system.

25. 22 Short Films About Springfield (The Pulp Fiction parody with the steamed hams scene)
24. Treehouse of Horror V (The Shinning, Time and Punishment, Nightmare Cafeteria)
23. City of New York v Homer Simpson (Homer has to go to New York, which he hates, to get his car back)
22. Summer of 4 Ft. 2 (The Simpsons go to the Flanders' holiday home and Lisa changes her style to appeal to the cool kids)
21. Homer the Great (Homer becomes leader of the Stonecutters)
20. Homer Goes To College (Nuclear inspectors find Homer hasn't finished college, so he has to go back and get a degree)
19. $pringfield (Or, How I Learned To Stop Worrying And Love Legalised Gambling) (Burns opens a casino, and Marge gets addicted to gambling)
18. Selma’s Choice (After being encouraged to have children, Selma takes Bart and Lisa to Duff Gardens with disastrous outcomes)
17. Boy Scoutz ’n tha Hood (Bart joins the Junior Campers after a Squishee bender, afterwards Homer takes the piss out of him before ending up on a father/son boat trip)
16. Homer At The Bat (Mr. Burns puts together a team of elite ring ins for a company softball game)
15. Who Shot Mr Burns? (Mr. Burns’s cartoonishly evil plots end in him getting shot in a whodunnit two parter)
14. Mr Plow (Homer and Barney both buy snow plows and become business competitors)
13. Flaming Moe’s (Homer creates a drink that takes Springfield by storm and Moe steals the recipe)
12. Last Exit To Springfield (Homer accidentally leads the plant in an industrial dispute, and Burns overestimates him as a negotiator)
11. A Milhouse Divided (Milhouse’s parents split up)
10. Sideshow Bob Roberts (Springfield’s Republican Party gets Sideshow Bob out of jail and elected to the office of Mayor with a prescient rigged election)
9. El Viaje Misterioso del Nuestro Jomer (The Mysterious Voyage of Homer) (Homer eats a Guatemalan Insanity Pepper at a chilli cook-off that leads him on a spiritual trip to find his soul mate)
8. Two Bad Neighbours (Former President George HW Bush moves to Springfield and immediately has beef with Homer and Bart)
7. King Size Homer (Homer puts on a huge amount of weight to be considered disabled and work from home)
6. Homer’s Enemy (After a trip to the candy convention, Homer is wrongly accused of sexual harassment and becomes a target for TV current affairs shows)
5. Homer Badman (Homer is falsely accused of sexual harassment after an incident with candy and a babysitter)
4. You Only Move Twice (Homer gets a job with a Bond-esque supervillian and the family moves towns with him, only for them all to be miserable)
3. Bart vs. Australia (Bart makes a six hour collect call to Australia and ends up being indicted for fraud here, leading to the family coming down under to negotiate an outcome)
2. Cape Feare (The Simpsons go into witness protection after Sideshow Bob leaves jail, only to be tracked to their new town — Terror Lake — by Bob)
1. Marge vs the Monorail (After Springfield comes into $3 million, a shyster bilks them out of it by building a shoddy light rail system that Marge tries to raise the alarm about)

So there you have it — the definitive top 25 episodes of the Simpsons.

Let us know what your favourite episode is and how badly you think we stuffed up this list!