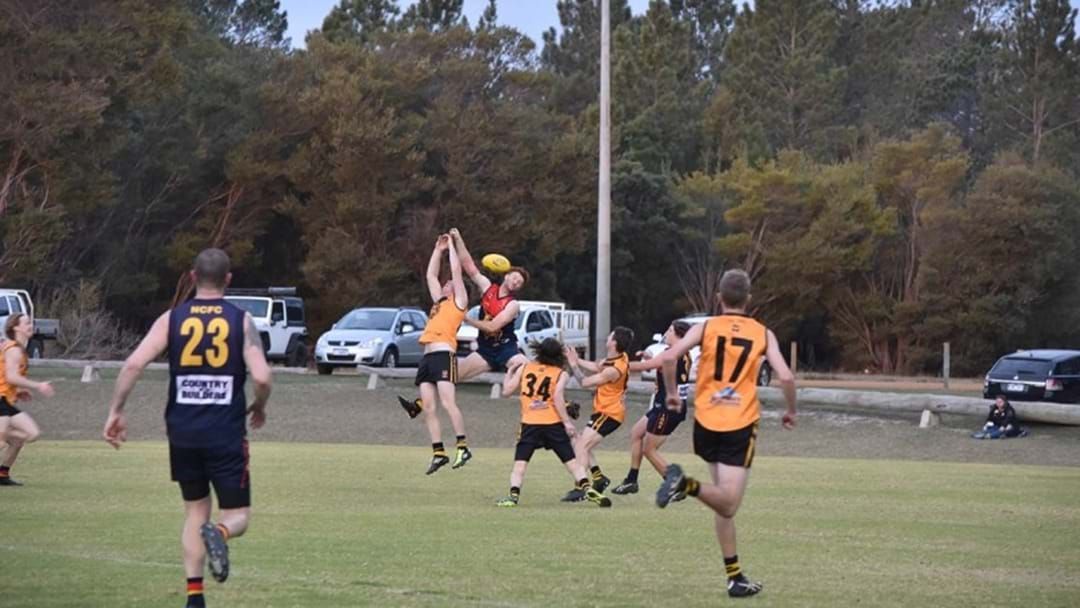 Newtown-Condingup are only a straight kick or two away from achieving their potential, after fallings down for the second time in a row in the EDFA round nine fixture against the Gibson Tigers at Gibson Oval.

The Lion’s faithful roared with five minutes to go in the final quarter when the away side kicked truly from the goal line to go a point ahead. Gibson were also to settle and battle through some nerves to wrestle back the lead with McCallion kicking the winning goal from fifty with a minute or so to go.

Earlier the final quarter could have erupted into controversy, when McDonald kicked a goal from fifteen metres out directly in front. The Gibson defenders were adamant the ball had sailed to the right of the goal post for a minor score and were dismayed to see the goal umpire signal a six-pointer. The field umpires conferred with the goal official and the goal was maintained to put the Lion’s in touch of Gibson during the tense final quarter.

Gibson led at every change, and even went into half time with a 21 point win. Captain Oversby and Dozer Burnett were strong around the ball and negated the Gibbo onballers. Their physical presence was felt and they moved the ball forward on countless occasions.

Craig Henderson, arguably Newtown-Condi’s best, was prolific. He rarely lost a contest and won possessions consistently throughout the entirety of the game.

Gibson captain Patch Janning’s settled into his role in the guts and worked tirelessly, especially in the final quarter when the game was on the line. He would finish with two goals. It was a great battle etween him and Tate Bertola, who would also finish with two goals. The pair going head to head was a joy to watch for spectators and they would share the spoils come games end.

Both backlines held up strong, which would contribute to the relatively low final scores.

The defining move came from Gibson, when McMeikan was moved from centre-half back to centre-half forward. He would throw his body recklessly into packs from there, and put pressure on the Lion’s back six who had previously been incredibly composed releasing the ball.

Coaches should note the efficiency that Newtown-Condi kicked with. In front of goal they kicked 10.5, already impressible, but their field kicking from across the ground denied the home side any easy boy.

Gibson should hang their hat on the fact they were challenged and able to respond, only the second time this year they have had to do so.

Esperance flex their muscles in Indigenous Round

At Esperance Oval there was a magical celebration of Indigenous heritage and culture, with War Dances, Acknowledgements to Country and special jumpers headlining the afternoon and evening.

On the footy field though the celebrations were even greater, with the Esperance juggernaut inflicting a bruise free 20 goal shellacking to its Ports opponents.

J Symonds was a worry early, sustaining a groin injury but would turn concerns into glee with six majors to his name across the game. Griffiths would also get a touch of leather poisoning kicking 3.7 and although it is promising the tall forward is getting his hands on the pill, Esperance coaches will have to sit him down and work on his kicking for goal, which is notoriously wayward.

Esperance have always boasted grunt in its midfield, but it’s there halfback line that will have opposition coaches worried. Hepburn Medalist and Captain Brendon White was down there alongside, Kaden Neill and Rohnan Brooking. The trio repelled every attack and were almost as damaging offensively as they were defensively, transitioning the ball from defence to attack with sublime skills.

Rhys Woods was back for the Dogs after a stint in Perth, he will be a welcome sight for Doggies supporters come finals.

For Ports, the suual suspects battled ahrd against the onslaught. Nigel Johnston was moved into the centre to provide some drive in the second half and Isaac Puna stood tall in an impressive defensive second half display.

Esperance will use the confidence to take on the toughest fixture of the game right now, the reigning premiers at Gibson.

Ports will have to regroup quickly to take on an inform Lions side who have been incredibly competitive in their last two games off footy. Ports did beat them the last time they met though, which should provide the initiative for the young side.