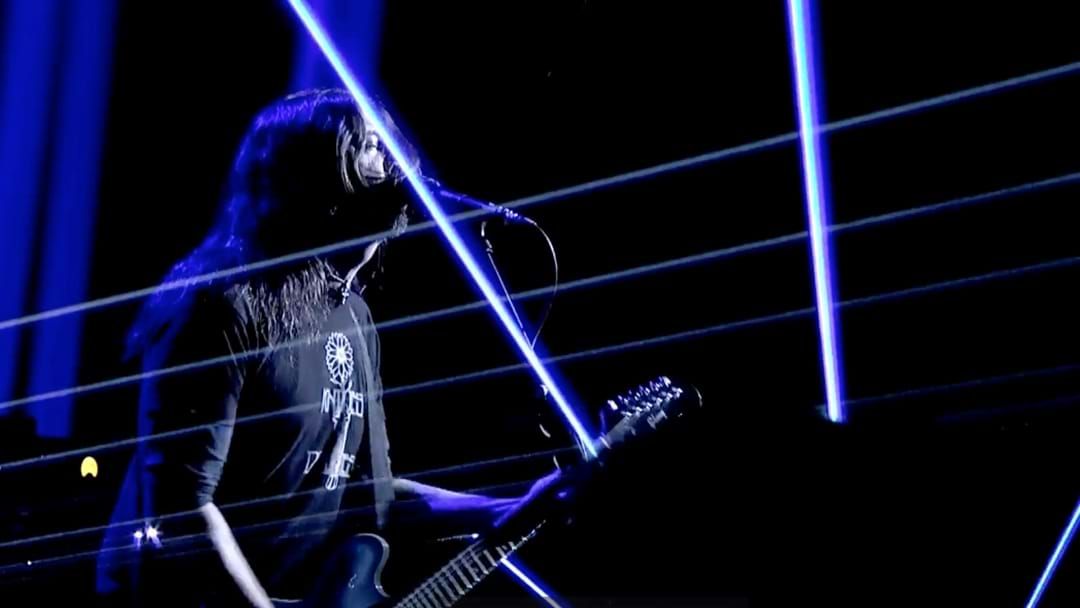 It’s been a huge 5 months since the Cal Jam 18 line-up was announced and we knew we had to be there.

A line-up of bands hand picked by the Foo Fighters: Iggy Pop and his Post Pop Depression Band, Aussie legends Gang Of Youths, new kids on the block Greta Van Fleet, Tenacious D,Foo Fighters and so much more- there’s something for every rock lover.

Although it felt like the driver was going to dump me in the dessert, the secluded location meant the music went up to 11- all day!

Walking through a bright rainbow into the festival site, it looks more like a carnival than a rock music festival, with bright colours, amusement games and rides a bright splash of colour amongst a sea of black, merch wearing rock fans.

Walking into the soundtrack of blues rock from stage opener Kingfish, who sounded like Buddy Guy but is fresh faced out of high school!

Next up is a HUGE line- thinking it was for free beer or something equally as awesome to warrant such a big line I saw it was a line to get a photo on Dave’s ‘Rock Throne’ he toured with after he broke his leg- and most recently used by Axl Rose.

To the left of the thrown is a huge tent, as big as one of the stages- it’s the Foo Fighters museum- jam packed with memorabilia and rarities before coming out to pose with the White Limousine!

Rolling up a hill littered with bright pink flamingos to the main stage to catch UK punk duo SLAVES the scale of just how big this event is really kicks in- there’s food stalls, merch booths and rock fans until the eye can see

SLAVES made a big noise for a two piece- they were loud, ballsy punk that had Dave Grohl and Taylor Hawkins rocking out side of stage.
This is one band to keep on your radar!

After an amusement ride and signature cocktail- that is served in a jar topped with a tiny cowboy hat I head back down the hill to catch Gang of Youths- yes I know this sounds ridiculous seeming they’re playing a record amount of shows on their headlining tour later this month- but it’s hard to stay away.

The Aussie band did us proud! From a small huddle of people to begin with to a massive crowd literally begging for more once they finished it’s not the last these American rock fans will see from them.

Next up a band I’ve been itching to see live since we first played their breakthrough single Highway Tune- Greta Van Fleet took to the main stage and from a distance it not only sounded like Led Zeppelin but looked it- with tie-dye tops, vests with no shirts, flared pants we needed a time check to ensure we weren’t transported back in time.
They did not disappoint rocking out harder than their years and drawing the biggest crowd the the main stage yet!

Now we’re on the home stretch.  The sun’s started to set and the backdrop of the Californian mountains is beautiful!

This really is a rock music paradise.

Garbage take the stage with a set for a greatest hits. When their band played their 1995 hit ‘Only Happy When It Rains’ it started raining! An unbelievable moment- it was a sign of what miracles were to come.

Tenacious D gathered the biggest crowd we’d seen down at the Sun stage all day.
The greatest rock band ever were ringing true to their own claims, sounding tight and heavy as a five piece.
It’s hard not to have fun watching these guys and the new material is sounding great- no cameos from Dave Grohl for this one, but it was great seeing his mum Virginia rocking out side of stage to the D.

Now for a moment I’ve been waiting over 2 years for; Iggy Pop and the Post Pop Depression Band. A record that’s been on high rotation since its 2016 release, it’s a farewell to David Bowie and a new sound for punk icon Iggy Pop.
The band on the record toured it live, which are headliners in their own right: With Queens of The Stone Ages Josh Homme, Dean Fertita and Troy Van Leeuwen with Arctic Monkeys drummer Matt Helders on drums.
The talent oozed from the stage, the sun was gone and the crowd were in full rock mode- hearing hits Lust For Life, China Girl and The Passenger with such a solid band it’s hard not to want to party.

The energy was huge as the Foo Fighters took to the stage.
Although the setlist was very similar to their Concrete and Gold tour that hit Australia earlier this year- you can’t not enjoy yourself when the Foo’s are on stage.

Rocking through history taking us way back to their earlier hits, including their debut This Is A Call the band then took us further than ever before with Dave moving back to drums and his Nirvana bandmate Krist Novoselic for the first official Nirvana reunion.

Deer Tick’s John J. McCauley taking the lead with his uncanny resemblance to fallen frontman Kurt Cobain, followed by the Queen on punk Joan Jett to round up this history making set with an appearance from The Distillers Brody Dalle on bass so Krist could play accordion for All Apologies.
Read more about the reunion here

To carry on the magic of the day as soon as the final note was played the rain began to fall as we all herded out of the valley.

A must visit festival for all rock fans. This is more than a Foo Fighters festival- it’s a celebration of the variety and talent in rock music.